Welcome to the Willow class page. Here we will be sharing pictures and information so that you can see what we've been learning in school and share our adventures!
Tudor portrait paintings - 14.2.20
Connie by Evie F
Evie F by Connie
Francesco by Oliver
Oliver by Francesco
Gabe by Lochlin
Lochlin by Gabe
Ruby K by Eden
Eden by Ruby K
Maisie by Sienna
Sienna by Maisie
Olivia by Emmie
Emmie by Olivia
Blossom by Emily P
Emily by Blossom
Jack R by Charlie S
Charlie S by Jack R
Evie R by Ruby S
Ruby S by Evie R
Jack W by Toby
Toby by Jack W
Melissa by Parya
Parya by Melissa
Aisha by Annabel
Annabel by Aisha
Lily by Emily W
Emily W by Lily
Charlie M by James
James by Charlie M
Tudor Monarch sketches in Art - 5.2.20

Woodford held our first ever Plastic Pollution Day on Friday. In Willow Class, the children created some artwork to highlight the threat faced by plastic pollution to the planet, and the sea in particular. Their passion for highlighting and doing something about this issue came across in the brilliant posters they made...

Year 6 have been busy making electrical Christmas decorations in Science / DT this week. The children were set a Dragon’s den style brief that required them to design and make a festive light decoration that used electrical circuits (bulbs, motors, buzzers, switches etc.). This allowed us to link our Science learning on electricity into a real life context, where the children had to work in groups, each taking on different roles.

Groups then had to come up with a company name and logo, before thinking carefully about their design and who their target audience would be. Each group had a £5 budget to purchase materials from Hobbycraft, and then had to work together to make their finished product. Have a look through some of their fantastic designs below: 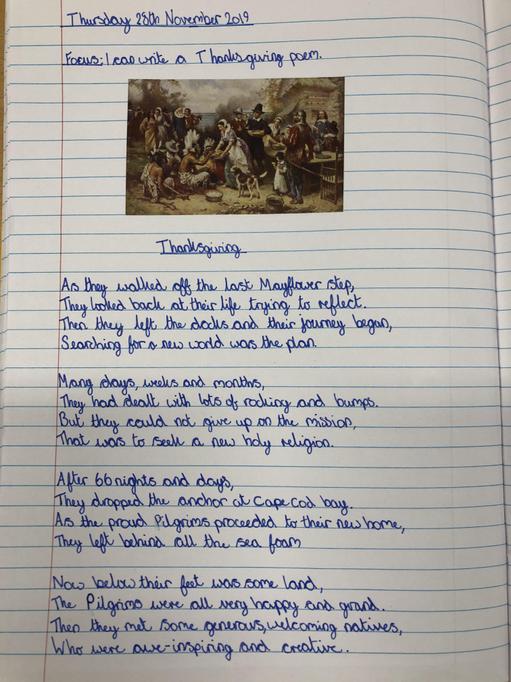 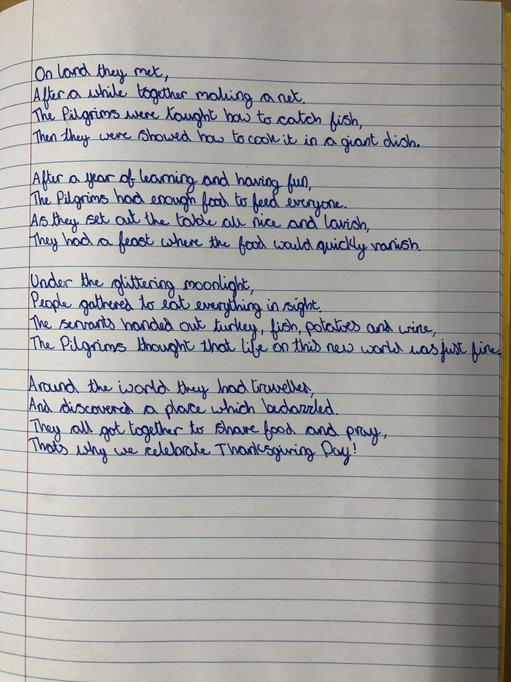 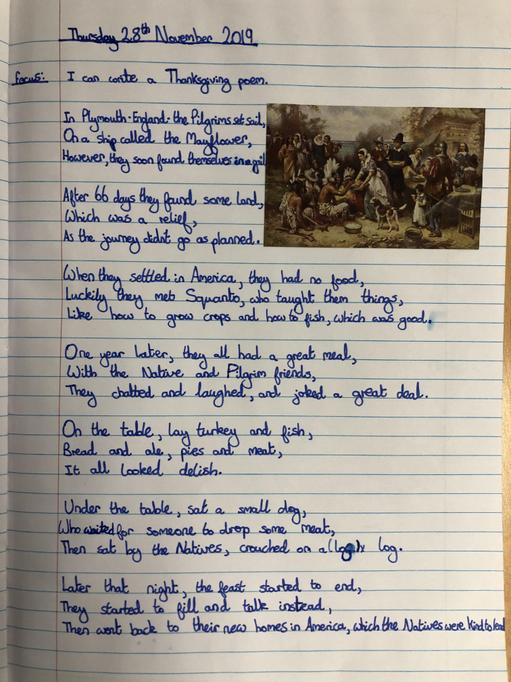 Year 6 have been doing basketball this term, and to finish this unit, they took part in an intra-school house competition. The games were played with a good, competitive spirit and there was some fantastic basketball on view with fast-paced, end-to-end action throughout. Congratulations to Tamar, who came out the winners!

After the tournament, some awards were given out to children who demonstrated some of the key School Games Values.

Well done to the Year 6 girls, who organised a bake sale today for Macmillan Cancer Support. The children were busy baking all week and the whole school was served during break time. The girls also sold bookmarks and ran a 'guess the sweets in the jar' competition.

They raised an impressive £260; school mufti also contributed £410, meaning a grand total of £670 was raised for the charity! 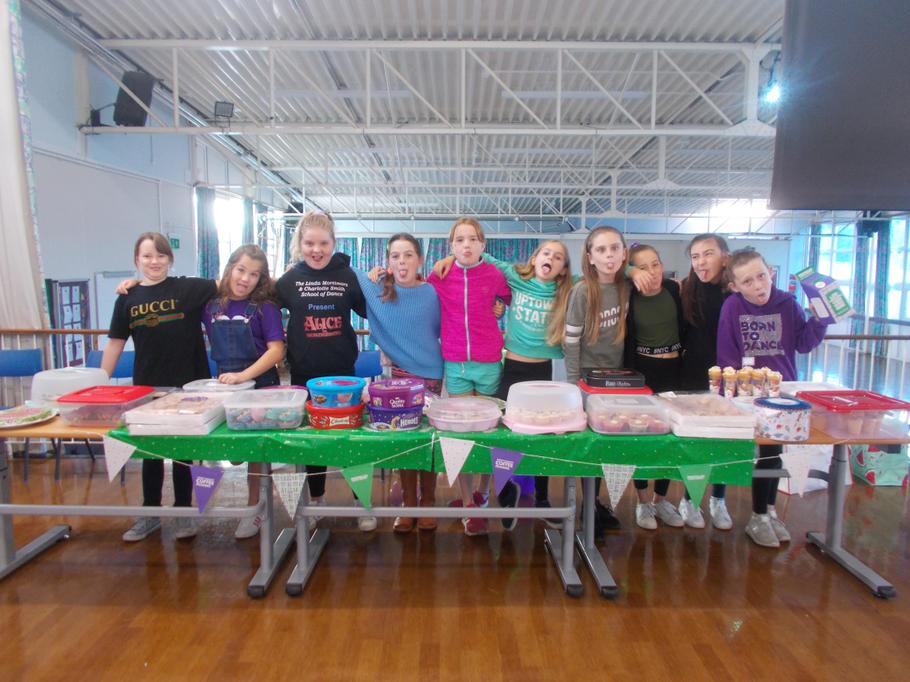 On Friday, Willow Class visited Dartmoor to study the River Meavy and the River Plym. The children learned a lot of information about how rivers change the landscape on their journeys to the sea. We looked at river features and took measurements for cross section drawings. This is part of our Geography unit of learning, ‘What is a river?’.

During Aspirations day on Friday, we welcomed some of our parents in to school to speak to the children about their careers. In Year 6, the children experienced workshops from Rob Ayrton (Marine Systems engineer), Andrew Mossford (Mount Batten Water Sports Centre), Zoe Boote (Border Force Higher Officer) and Steven Walker (Fisherman).

A big thanks to all the parents who gave their time; the children certainly seemed inspired!

This term, Year 6 have been creating mindful artwork with the theme of ‘A sense of place’ - a relaxing place where they could envisage themselves being, away from any thoughts of SATS. Children were inspired by the artist Paul Cezanne and have been learning key techniques, such as the use of perspective. This is the way that artists manipulate a flat surface to bring the viewer into the space. There are lots of different ways of creating perspective (eg. vanishing points, the size of objects, use of foreground figures and the impression of distance created by painting objects such as mountains/ sky paler and hazier).

Check out some of their fabulous paintings below and see if you can spot any techniques for creating perspective in them.

A group of our year 5 and 6 children visited the University of Plymouth yesterday to take part in a STEM session, looking at some of the techniques that Crime Scene Investigators use to solve crimes.  Working in pairs, we used computer software to produce facial composites that matched a description, in the same way the police would if they were searching for a criminal!

Have a look at some of the e-fits of our fellow year 5/6 students.  Can you tell who they are?

Well done to all the children, who made a great effort dressing up as their favourite book characters today! 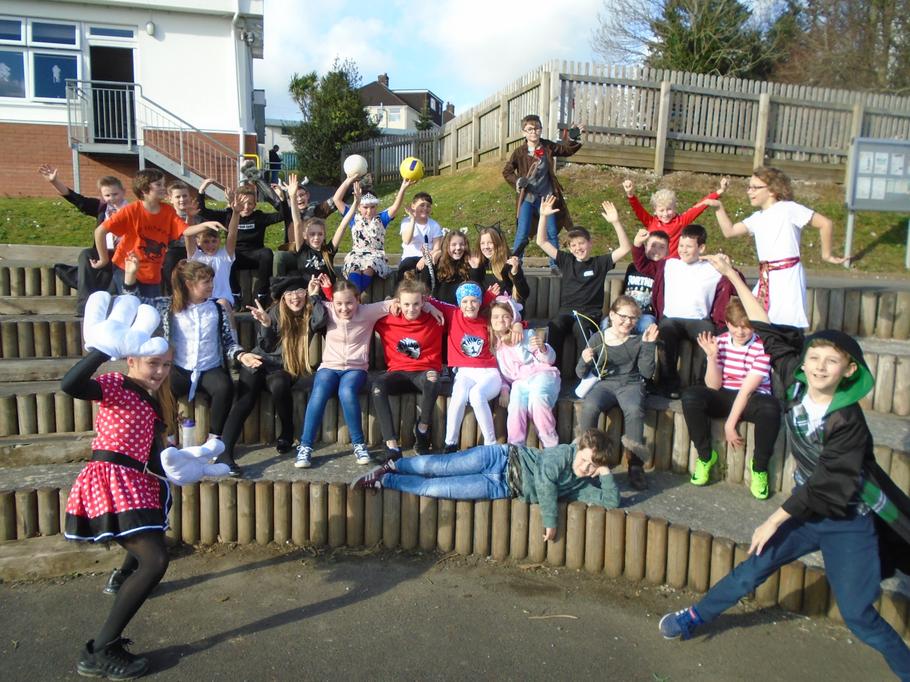 To celebrate World Book Day, Year 6 were given the task of writing the story of Cinderella in just 50 words! This turned out to be a far trickier task than children first expected, involving lots of careful editing and succinct language choices. Below are some examples:

Cinderella lived a happy life until her parents died. The step-family were horrible. Once day, a Prince invited them to a ball; Ella’s godmother granted her desired wish: a beautiful dress. At the ball, she danced with the Prince but left her shoe. He tracked her down then married Cinderella.

Once upon a time, Cinderella became a servant to her wicked step-mother. A ball was announced; sadly, she couldn’t go. Her godmother appeared and granted her wish (which would break at midnight). She danced with the Prince but had to run, leaving her slipper. He found her and they married.

Cinderella lived with her step-family. One day. the Prince invited everyone to a ball; she couldn’t attend. Fortunately, her fairy godmother appeared and gave her a dress and carriage. At the ball, she danced with the Prince but lost her shoe. The Prince found the fitting foot and married Cinderella.

As part of the Mayflower 400 celebrations, children at Woodford were recently given the chance to become published authors by writing either a story or poem based on this year's theme of 'Beyond the Horizon'. The best pieces of work will go into the 2019 Anthology of young people's writing. In Year 6, we chose to write a poem on the Spanish Armada, which linked into our Tudor learning. Have a read of the winning entries in Willow class below:

Beyond the horizon: The Spanish Armada

Beyond the horizon the Spanish souls sail,

Their fleet will break and their troops will shake,

all because of the daring Drake.

Phillip II had offered a marriage,

and to take Queen Elizabeth in his carriage.

She turned down his offer and love,

so he angrily threw off his glove.

He was angry that he was denied,

so that night he stamped and cried,

But little did he know he would soon be baked,

all because of the daring Drake.

To the Spanish he was a tyrant,

to the English he was a pirate.

As he stole from the Spanish,

they wanted him to vanish.

While they planned their attack,

Drake was ready to fight back.

Whilst playing bowls on the hoe,

in to sight came the Spanish foe,

Up the English Channel they came,

ready to lose and meet their shame.

Sir Francis Drake had an advantage up his sleeve,

as his ships were small and easier to weave.

He lit his ships and sent them out,

the enemy burned and scattered about.

He boldly put up the sail,

and the Spanish began to bail.

The stormy seas would do damage,

and cause a big ravage.

The Spanish muttered to themselves, “For goodness sake”,

all because of daring Drake.

For the English, it was yet another win.

Knighted by the Queen,

By Kinglsey and Max

one of the finest sailors one could ever make.

Spain was ruled by Prince Philip the second,

whom Queen Elizabeth he beckoned.

She turned him down with no heart felt,

yet he pleaded with a heart that started to melt.

The Spanish launched their ships out in the ocean,

this they thought was their secret potion.

so he set sail to England to make him vanish.

Suddenly the Spanish appeared on the horizon beyond the sea,

but Drake didn’t panic and finished his game of bowls with glee.

With worried voices, his friends said it’s time to go,

the English will not be defeated no, no, no…

As they got closer, Drake had a plan,

to set his own ships on fire as quick as they can.

The Spanish formation was scattered,

against the rocky shores the ships were battered.

What was left sailed back to Spain,

Never stepping on these shores again.

Drake laughed and jumped with joy,

By Victoria L and Jodie B

Willow Class have been painting Tudor style portraits of each other this term. They added in all sorts of interesting features (including beards in some cases!). Have a look at their fantastic finished pieces below:

Willow Class have enjoyed learning about the Tudors this term and Henry VIII's ruthless reign as King of England. Children have been writing diary entries from either Henry or Anne Boleyn's point of view about the day before and actual day of Anne's execution in 1536. As well as including lots of the key events that took place, they have worked really well to include a range of the key sentence skills we have been working on this term. Have a read of some examples of the children's work below: 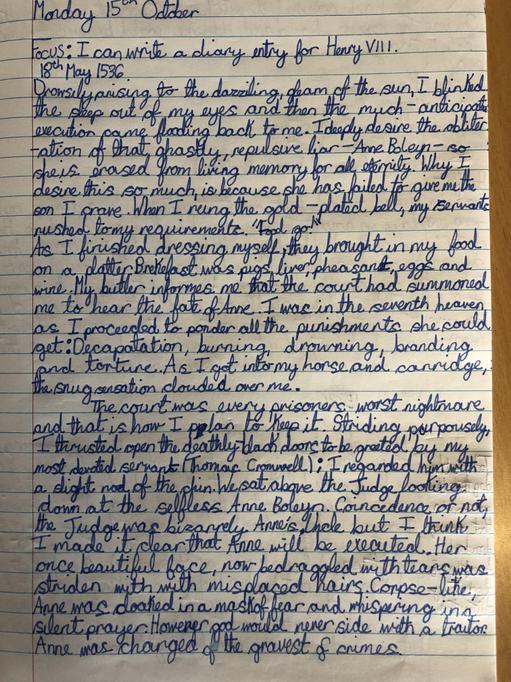 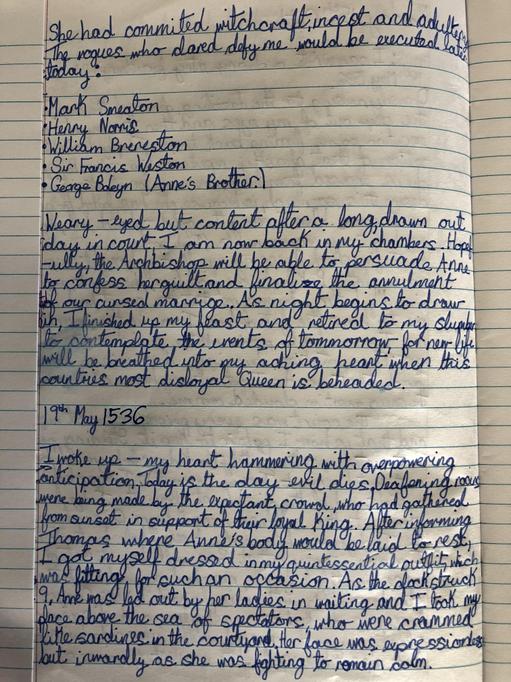 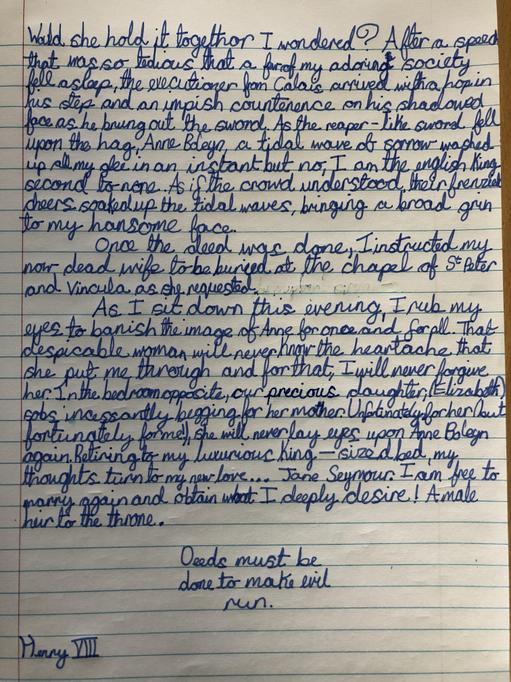 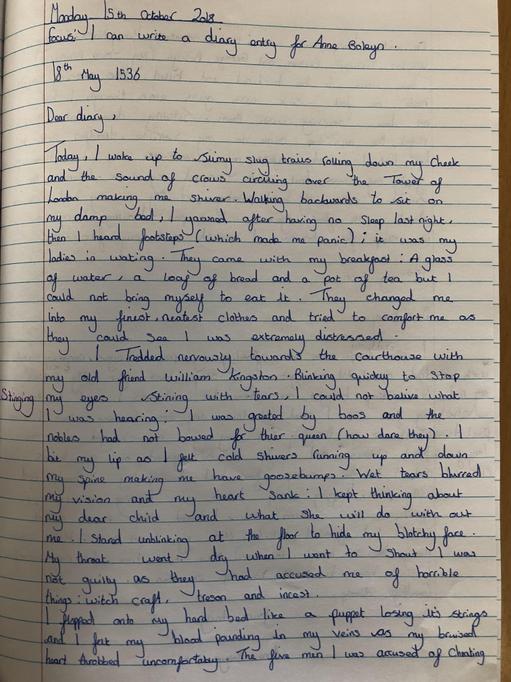 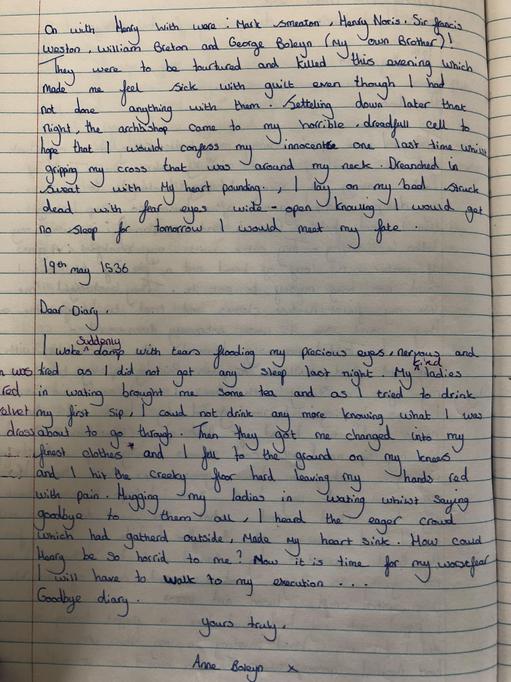 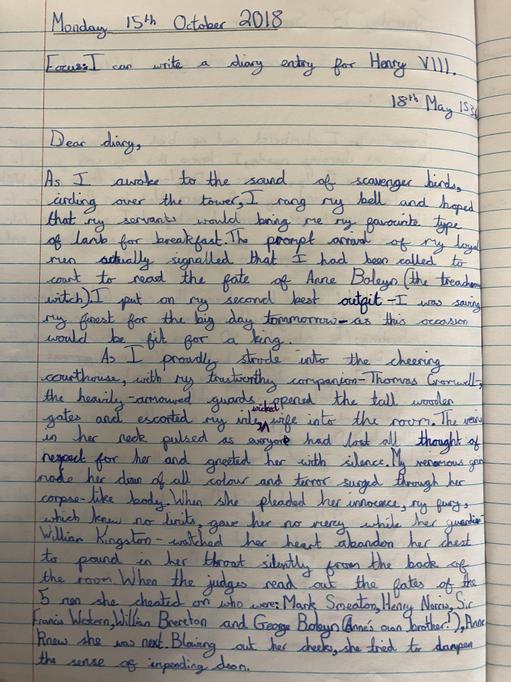 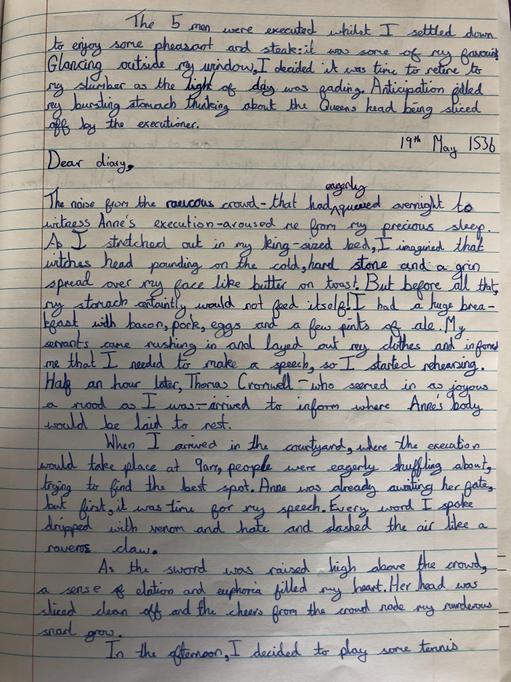 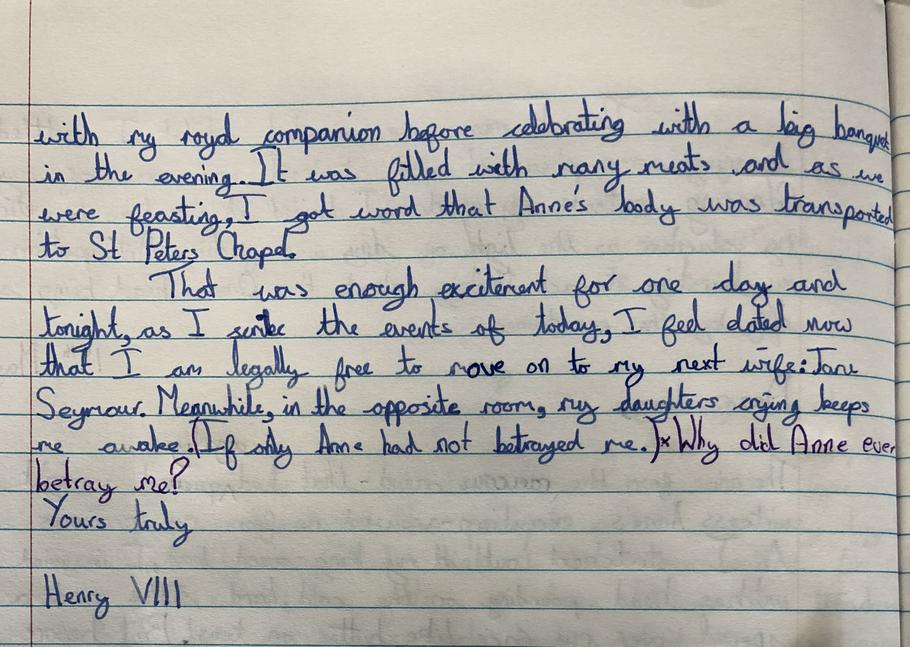 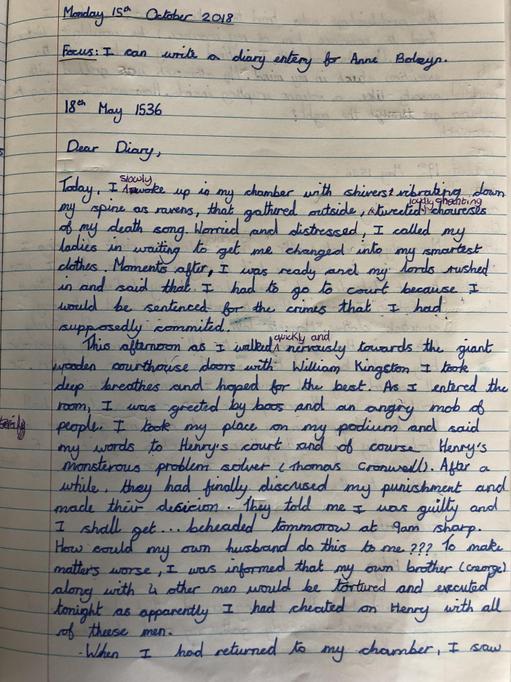 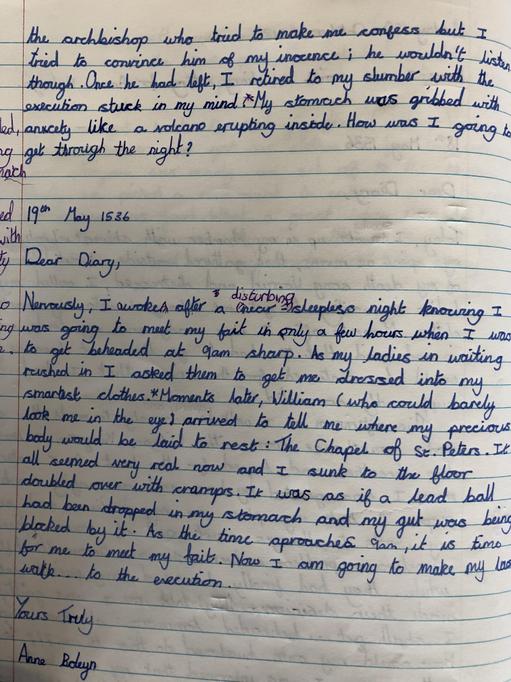