This week, Chestnut have begun work on our own space website.  It's in the very early stages at the moment but you can track it's progress by visiting https://sites.google.com/view/thedarknessaroundus

As part of our link up with the South North Atlantic Training Transect 'Floating Summer School' our Year 5 entered a cup designing competition.  We had to decorate a plastic cup with a local symbol, something that reflected our school or something that represented the expedition.  Out of all the cups that were designed, Louise and Maya had theirs selected by the organisers to travel to Greenland on the submarine.  The submarine descended to the sea bed to take some samples - not the deepest part of the atlantic but still 3.5km - and you can see that the change in pressure shrunk the cups!!

As Louise and Maya were selected as winners, they have been invited to a presentation on 16th July where they will be presented with a prize!  Well done girls! 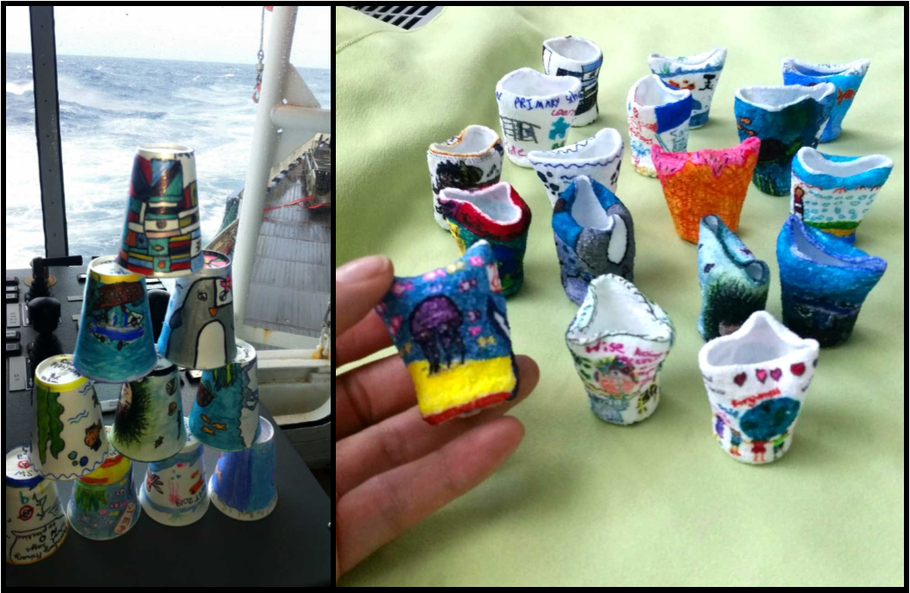 Today, we had our first move and learn session with Josh (a Plymouth Argyle coach).  He taught us about what physical movement was and how it affected us.  We learned about all the different kind of activities which will effect our physical situation and he also taught us about how different stages (as in moderate, intense and vigorous activities).  We also learned about how it effected our pulse rate and took part in some small excercises in the classroom such as walking on the spot and jogging to test our moderate and intense pulse. Then we went to the hall and did some basic football movements\skills to check our vigorous pulse.

By Eddy, Maia and Emma 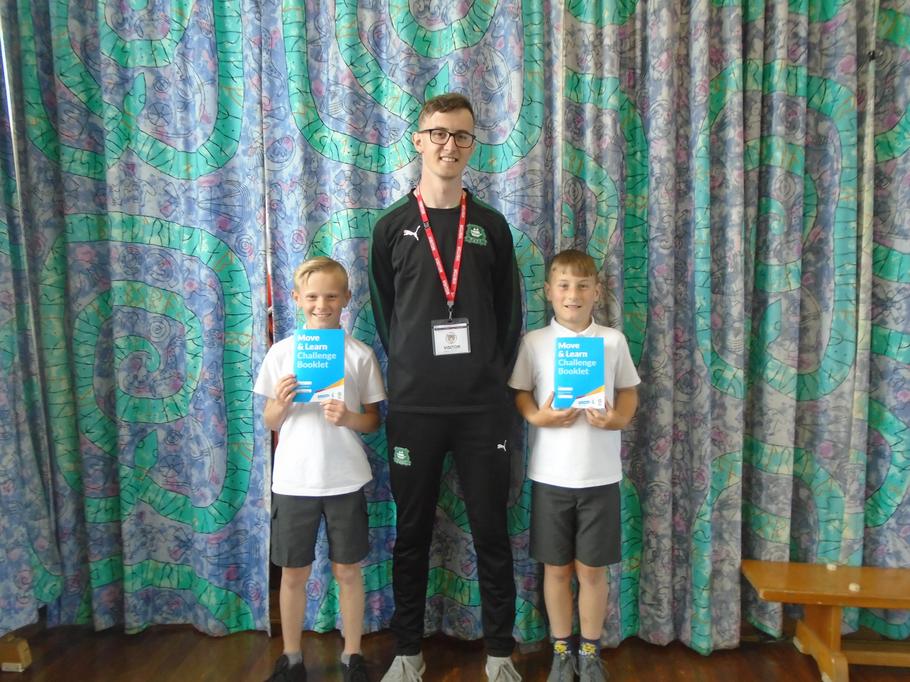 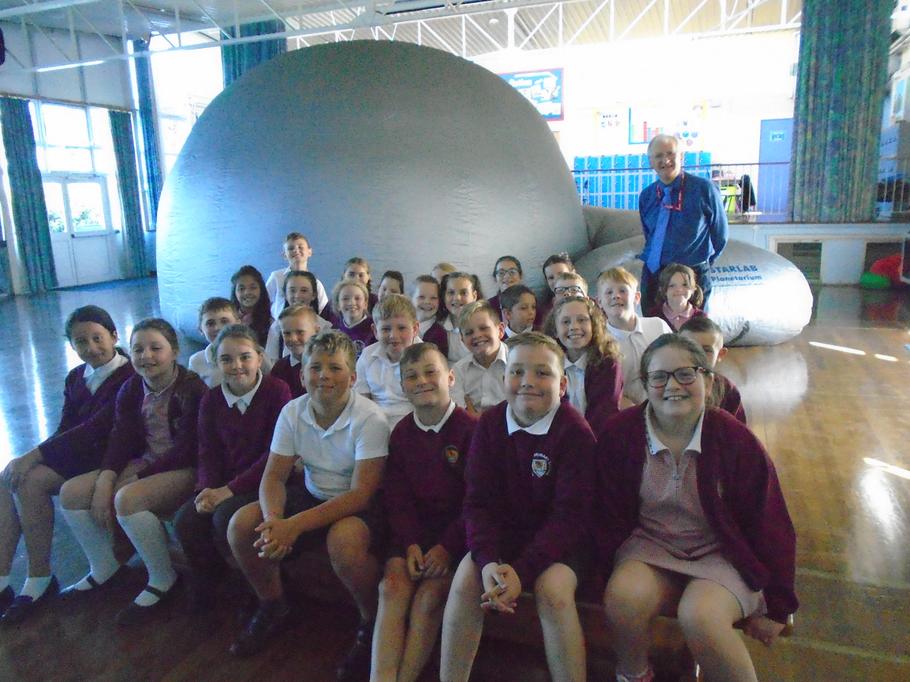 Yesterday, two of us went to a Maths Masterclass at Plymouth University and we had lots of fun!  We had thought it might involve lots of tests but we were wrong!  In fact, we had to work out how many blocks were in a plonk, how many plonks were in a schlidd, how many schlidds were in a day and crazy stuff like that!!!  My favourite thing was when we had to rank objects based on how useful they would be for someone who had to survive in space.  Our rankings were only a few points different to NASA's!  Overall, we both had lots of fun and we'd love to go again.

By Beau and Isla

A group of our year 5 and 6 children visited the University of Plymouth yesterday to take part in a STEM session, looking at some of the techniques that Crime Scene Investigators use to solve crimes.  Working in pairs, we used computer software to produce facial composites that matched a description, in the same way the police would if they were searching for a criminal!

Have a look at some of the e-fits of our fellow year 5/6 students.  Can you tell who they are?

By Josh H and Lily S

Today in year 5, we celebrated our 'Greek Day' and were fortunate enough to have our expert, Mr Johnstone, come in to share his knowledge and artefacts and give us an idea of what life would have been like in Ancient Greece. We were so impressed by the lengths the children went to to dress up as Athenians and Spartans and their was an impressive range of chitons and peplos on display.  We spent the day learning about Greek life, myths and legends, maths using an abacus and the Olympics and it was topped off with a Greek feast for lunch which seemed to go down really well (mostly). Take a look at our photos!

Today, as part of our Book Day celebrations, Chestnut Class re-wrote the story of Cinderella using 'yoked' sentences.  A yoke sentence is one that begins with the last word from the previous sentence.  Telling a whole story in this way is really tricky and requires careful language choices and manipulation of sentence structure.

Once upon a time, living in a faraway land, there was a wealthy, clever gentleman, who had an independent, young girl, with a loving sweet heart called Cinderella.  Cinderella’s father (who had been widowed for many years) married for a second time in his life so his daughter would have a mother to look after her and be there for her.  Her stepmother had two ignorant, ugly daughters – Anastacia and Drizella.  Drizella, Anastacia and Cinderella’s dad unfortunately passed away, and Cinderella’s stepmother started to treat her like a slave and a brat.  “Brat, come here and make me a cup of tea and bring the biscuit tin upstairs,” she shouted at Cinderella.

Cinderella was busy at work one day while, at the palace, the King was talking to the Grand Duke about having a ball so that the Prince could find true love.  Love, Cinderella also hoped she would find someday but her thoughts were suddenly interrupted when there was a loud knock.  KNOCK, KNOCK, it was the Grand Duke ready to give her the invite which she took upstairs to her stepmother.  Stepmother was extremely cruel and took it for her daughters but she did say that stepmother could come to the ball if she had completed her chores.  Chores she did but her little mice friends (Jaq and Gus) knew that she wouldn’t have time to finish her mother’s dress so they finished it for her.  Her evil stepsisters saw Cinderella in the dress and were so jealous they ripped it apart terribly.  Terribly ripped it was, so she ran and sobbed as she was so sad.

Sad and depressed, she wept until the figure of a lady with a baby blue gown appeared next to Cinderella.  Cinderella recognised the familiar face and the frail, elderly woman chanted comfortingly, “Bibbley, bobbley boo, make a pumpkin, a dog and some mice appear quickly!”  Quickly, like a flash, the small, round pumpkin turned into a glamorous, jewelled carriage which Cinderella thought was beautiful.  Beautiful fairy dust filled the air, circling Cinderella.  Cinderella watched her fairy Godmother spin her wand and saw her mice friends turn into a gorgeous white horse which made Gus very pleased.  Pleased because Bruno the dog was also turned into a footman (A servant who would help Cinderella).  Cinderella then found herself wearing a blue, sparkly dress with stunning flowers covering the rim and riding in her new carriage towards the ball excitedly.

Excitedly, she stepped onto the marbled, magical floor that glittered in the palace light.  Light shone on the narrow table organised splendidly with a magnificent cake, beautifully decorated.  Decorated pillars draped with bows towered over her.  Her love for the prince grew as she spotted him out the corner of her eye.  Eyes glistened on the dancefloor as all Cinderella’s worries washed away.

Away she dashed though, like a carriage on the highway, as she set eyes on the huge clock that showed twelve.  Twelve was the time she had to set off from the grand ball, leaving her handsome prince behind.  Behind her, the prince begged, Please don’t leave; I’ve found my true love finally!” Finally, Cinderella ran away as she heard the last chime.

Chime went the clocks as she ran up the winding staircase to the elegant carriage before it was too late.  Late it was and Cinderella’s glass slipper fell off onto the marble staircase clanging loudly.  Loudly, the carriage raced into the night, leaving behind Cinderella’s right slipper.

“Grand Duke?  Why would he be here?” muttered Cinderella.

Gus, by now, was holding the bronze rusty key and desperately unlocking the shabby door to set her free.  “Free at last!” shouted Cinderella.  Cinderella waltzed down the stairs excitedly and tried the slipper on.  On that day, she knew her life would change forever.

Forever, Cinderella’s life changed because she found her true love, the Prince.  Prince Charming, who was very good looking, had his first kiss with Cinderella.  Cinderella was so happy she made her two ugly step sisters maids and they had to mop the floor and also make all the food and more.  More and more people started to hear Cinderella’s story before she got married and gave her lots of gifts and dresses that were sparkled in the bright light, glittering beautifully.

Congratulations to Isla who won the Mayflower 400 poetry competition for Chestnut Class.  Isla's work, along with that of Tilly and Grace F has been sent off to the organisers of the competition who are compiling an anthology of children's work.  Hopefully, the three girls will soon be published authors!!

BEYOND THE HORIZON by Isla

Beyond the horizon, the Pilgrims had beliefs,

But none were the same as the old king chief.

And they all agreed,

They finally agreed to leave on the 15th of June.

They packed their bags and said goodbye,

This was not the home where they wanted to die.

From England to America, they knew they must go,

Across the seas they sailed, rocking to and fro.

Bash, bash; bash, bash! It was tough but they did not fail.

The Mayflower did a grand job, far better than any other,

And the Pilgrims found a life,

The pilgrims found a better life, where they would have no bother.

Today, we spent some time decorating a Christmas tree that, weather permitting, will be displayed on the Ridgeway as part of a competition being run by the council.  We decided on a theme of family and community and set about decorating the tree to celebrate these things.  For the moment, the tree is displayed in our KS2 hall should you wish to visit.

Over the last two weeks, the children have been studying The Highwayman by Alfred Noyles.  Inspired by this, this week, we wrote our own narrative poems, telling the tale of a character who had to journey home from a dangerous situation.  Having finished our poems this morning, some children were able to perform their poetry for the camera so that parents/ carers could enjoy them too. 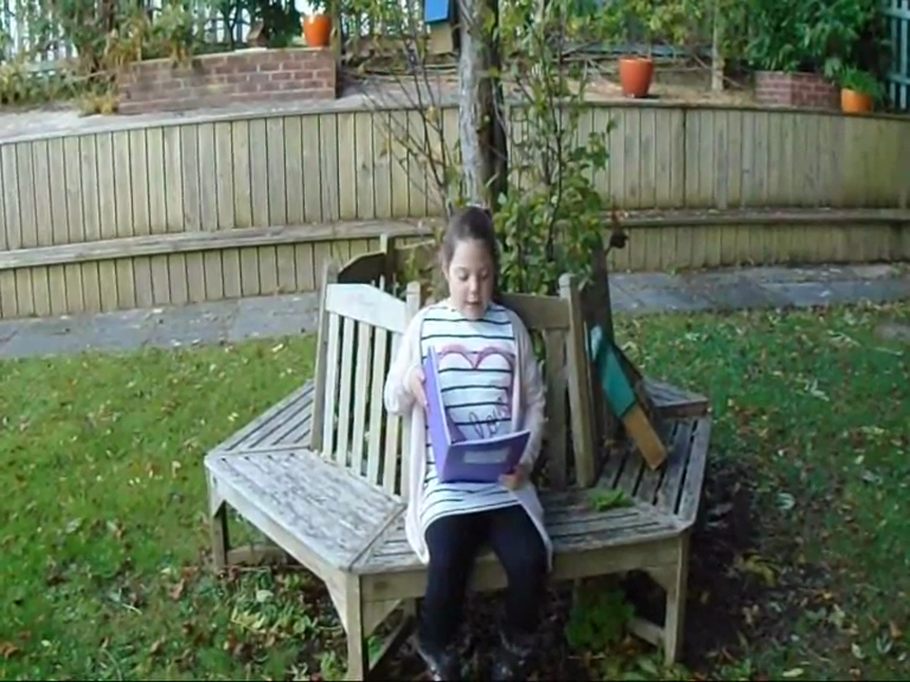 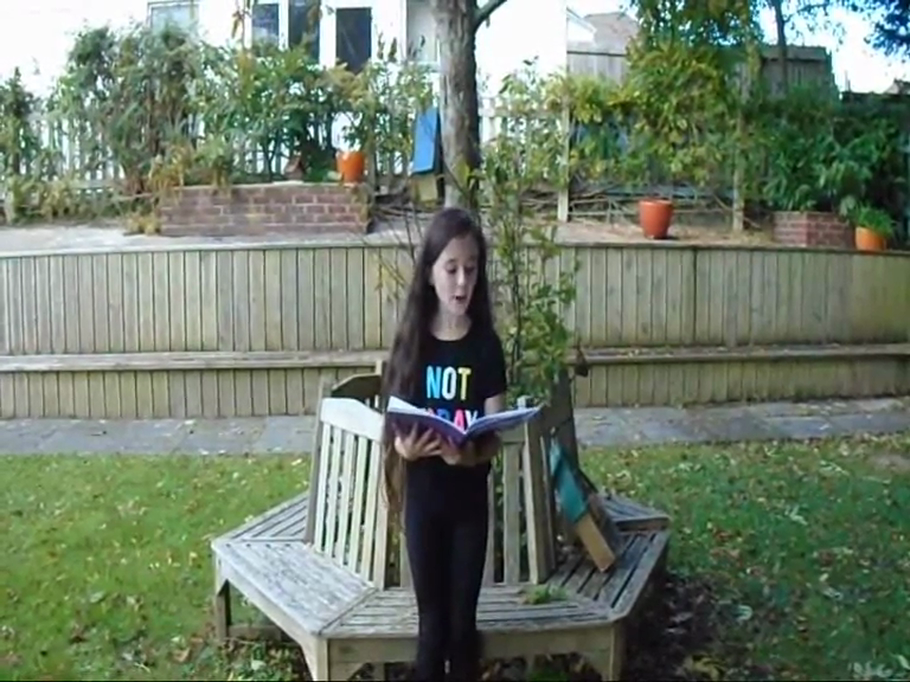 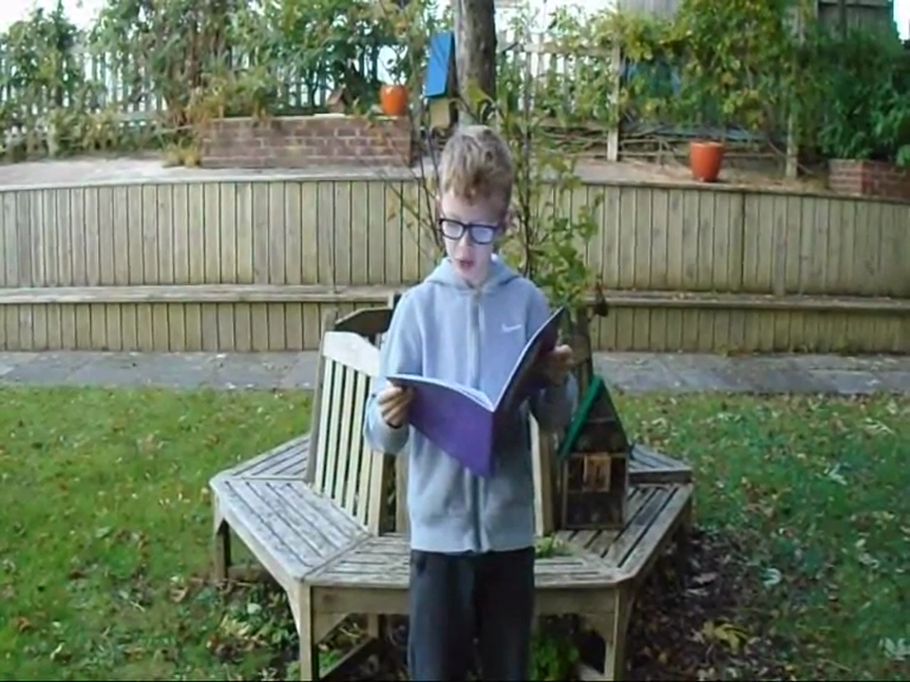 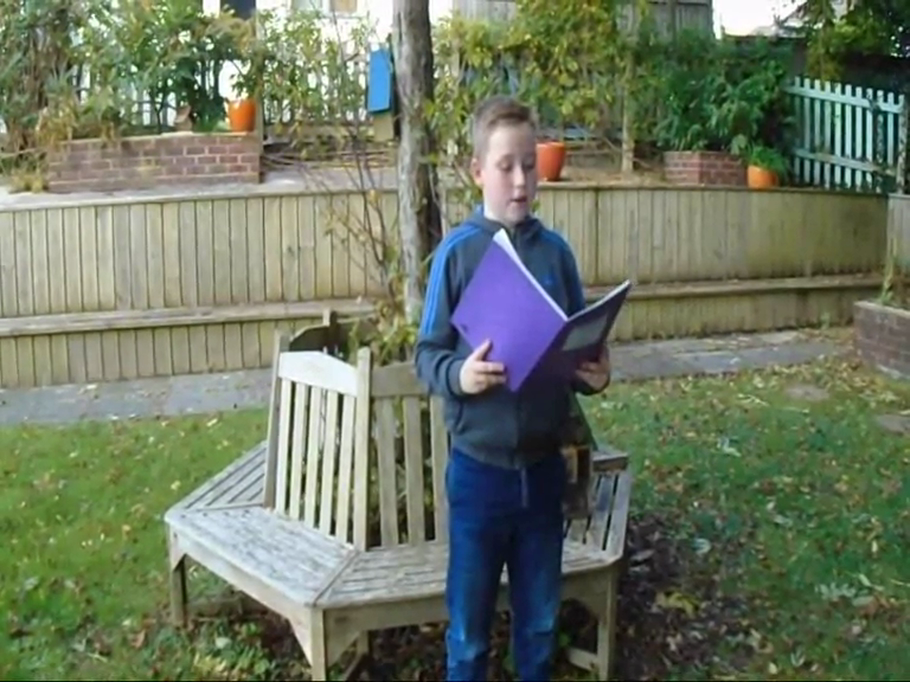 In our comprehension lesson today, we looked at The Highwayman by Alfred Noyle.  We watched an animation to accompany the text which is linked below. 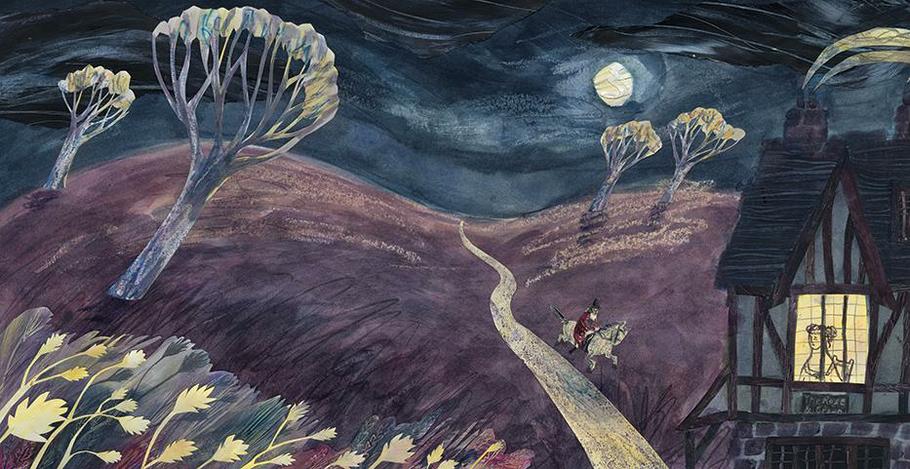 We're just back from a trip to Dartmoor as we are learning about the transition from the Stone Age into the Bronze Age.  Mr Johnson (a history expert!) came with us and explained to us what sort of animals were around in pre-historic times: wild bore (pigs with tusks) elk, packs of wolves, brown bear, mammoths and sabre-tooth tiger!  At the start of this period, people ate nuts, berries and any meat that they could hunt but by the end, Iron Age people were farming and could make clothes out of animal skin, sheep's wool and leather.  They were also able to make bread as they grew crops like wheat.

We had a fantastic day and learned a lot!

Welcome to the Chestnut class page. We hope everyone has had an enjoyable summer break.  The children certainly seem raring to go this year.

Homework in year 5 is usually given out on a Friday and will be posted on the 'Homework' page which you can access by clicking the link above.  This week, the children have been asked to cover their new homework books.  If you have any problems, please let us know.