Yesterday, Year 5 went to mount Edgecumbe for a school trip where we took part in Outdoor and Adventure Activities.  One of our activities was orienteering/ den building.  We had to work in pairs to find letters and solve maths questions in order to get material to build our den. Next, some Hele's School helpers came and did a test to see if our den was waterproof - luckily it was strong.

After that, we played some fun games such as space hopper racing, a blindfolded obstacle course, and a parachute game along with 7 other games.

Finally, we did beach art where we had to make a shark using materials found on the beach: pebbles, seaweed , sand and charcoal.

Once we were finished and the presentations were over, it was back to school on the ferry!

By Roma B and Phoebe D (Sycamore)

We spent the morning at Plympton Academy today, playing volleyball in PE and then cooking Fajitas in Food Tech.  The children had a great time and a few of the children discovered a talent for cooking while we were there!

This afternoon, Rupert Elford came to Woodford to perform a comedy routine on a uni-cycle!  This was our prize for finishing in 1st place in the Big Pedal earlier in the year.  Jodie K from Sycamore had the honour of collecting the trophy.

Thanks to Abbey, Olivia and Lily for photographing the treat for us!

What a brilliant photo of all the children who took part in the Schools' Half-Marathon Challenge on Sunday.  If you look closely enough, you should be able to pick out our two Chloes and Ollie and Grace! 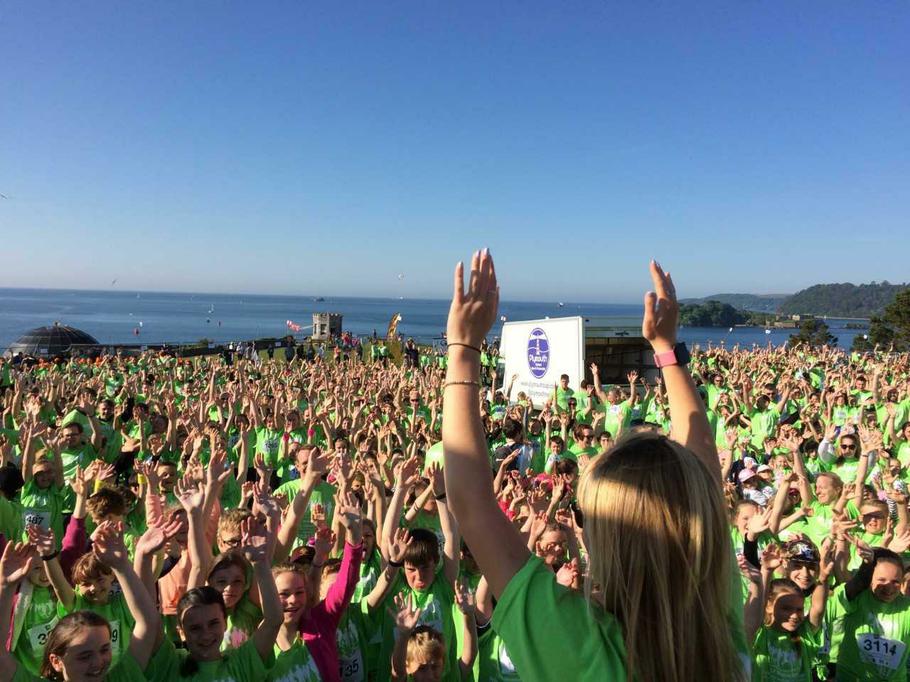 Lily also managed to make BBC Spotlight!  Have a look from 2mins 44secs: 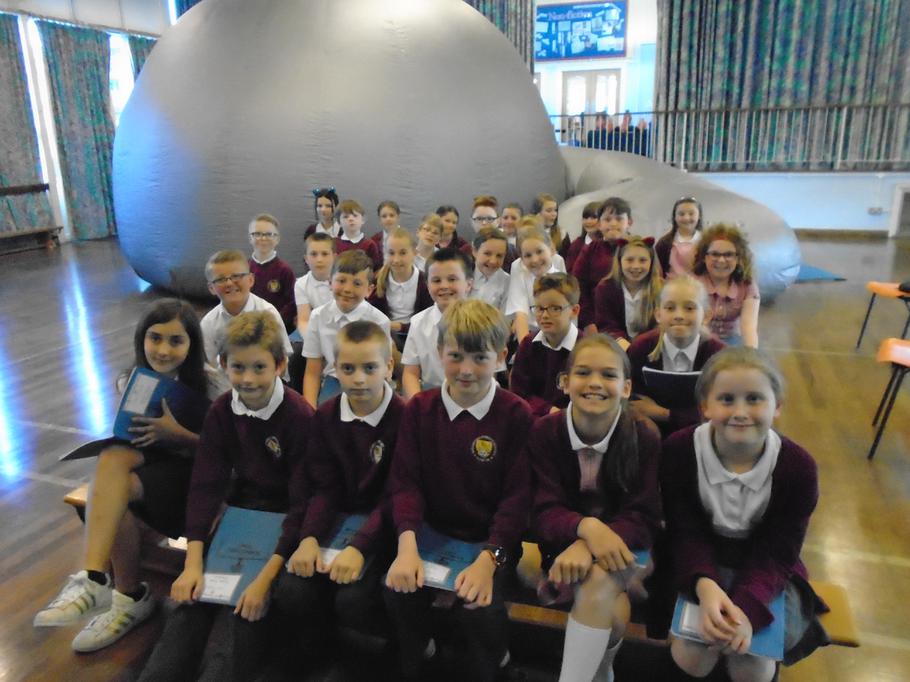 As part of our World Book Week celebrations, Woodford are holding a story writing competition.  Last week, Chestnut had to come up with the opening to a story, titled 'The Lucky Escape.'  We enjoyed sharing ideas and crafting the sentences and we're really happy with what we've produced.  The story has since been passed through year 1, year 2, year 3 and year 4 so we're looking forward to seeing how everything develops when the stories are shared in Friday's assembly.  In the meantime, have a read of the opening we produced.

Boiling with rage, Professor Hardbrim thumped her fists hard onto her oak desk. Her face was scarlet red; it was as if her body was filling up with boiling lava. Slowly, a solitary bead of sweat trickled down the fury-filled professor's wrinkled forehead before finally dripping off the end of her beak-like nose. Her eyes, which were once sea-blue, had turned fiery red and were bulging out of her sockets, threatening to detach completely from the rest of Hardbrim's now purple face. Even her ears had turned purple and Taylor thought that he might actually be able to see smoke spilling out of the teacher's flaring nostrils.

"TAYLOR ARNOLD-SMITH! First of all, you mixed the red liquid with the blue liquid when your teacher made it clear that was a bad idea. The resulting explosion destroyed the whole science wing and it will take months and millions of pounds to rebuild!"

Taylor stood dry mouthed in front of the enraged teacher.

"Next, you completely caked the walls of our glorious Grand Hall in mashed potato, baked beans, and Chef Ladle's gooey chicken pie! I cleaned that with my own perfectly moisturised hands and shellac nails."

"Then, you catapulted MY CAR KEYS into our school pond. Where did you even get a catapult from?"

"MY PANTS? MY FAVOURITE PINK PANTS? MY 'I ❤ THE HEADTEACHER PANTS?? AAAARRRRRGGGGHHHHH!" shouted Professor Hardbrim in a fit of anger. "And, as if all that wasn't enough, earlier today, I heard you calling me a 'hostile, demented bull' in front of all your friends! You’re in BIG... BIG... BIG trouble. You are to be sent to your room in isolation for 2 whole weeks. We'll deliver your food to you. Don't even think about coming out your door!"

Taylor sat on the end of his bed and thought about how he had humiliated Professor Hardbrim, wrecked the Grand Hall and burned down the science lab. Soft, wet tears of regret rolled down his cheeks and dripped onto a photo of Taylor's family that he was holding tightly in his hands. His mother and father, three big sisters (Faith, Gemma and Madelaine), two little brothers (Jacob and Mason), his dog (Twix) and his cat (Cuddles) beamed back at him. Oh, how they would be disappointed in him. He hadn't meant to do all these thing wrong. Kyle had dared him to do all of them and now it was Taylor who was in serious trouble. He so wished that he had had the courage to say no but Kyle could be so intimidating. Although, he had to admit that the whole pants thing was quite funny!

Hours seemed to pass and Taylor had no more tears left to cry. As his last tear dropped down onto the edge of his photo, the weary boy loosened his grip. At exactly that moment, a sudden gust of wind blew in through the open window of his second-story room and snatched the precious souvenir from his grasp. Taylor lunged after it but it was too late. The photo was slowly descending down to the ground outside. He was distraught. At that moment, nothing in the world meant more to him than the photo of his happy family smiling and the good memories it brought flooding back. He had to go after it. Taylor hopped on to the window ledge and dangled his feet outside. He closed his eyes, clenched every muscle of his body tightly and pushed himself off the end.

Taylor landed with a thump; his legs gave way underneath him and he crumpled to the ground. Had he survived? Was he injured?

Slowly, he stretched his arms out, then his legs, then clenched his fists. He seemed to have survived the 20 foot drop unhurt. Taylor opened his eyes and looked up to marvel at just how high his window was. By now, the photo was being swept around the grassy area outside the boys’ dormitories by the strong evening breeze. Taylor chased after it and after two or three attempts, managed to stamp down on the photo with his foot to stop it from blowing around anymore. He picked it up and clenched it to his chest. The relief was short lived. At that moment, from over his right shoulder, Taylor heard a voice that immediately sent fear and anxiety coursing through his veins: it was Kyle.

“What are you doing here?” barked the school’s most feared bully. “Hardbrim said you had solitary confinement in your room for two weeks! I can’t wait to tell her that you didn’t even last two hours!”

A million thoughts raced through Taylor’s mind. Professor Hardbrim would be so angry. His dad would kill him when he heard about everything that had been happening. Mum would be so disappointed. He couldn’t face another telling off. Taylor took off. He slalomed in and out of the Chestnut trees in the gardens, hurdled over the barriers and ducked under the toxic sign that protected the demolition site that used to be the science wing.

Theseus and the Minotaur Setting Description - 17.01.18

Our English learning around Theseus and the Minotaur has continued this week and we've been writing descriptions of the 14 Athenian sacrifices arriving at Crete.  The children have produced some incredible writing that I know they will be keen to share at parents evening.  Abbey's work is shared below. 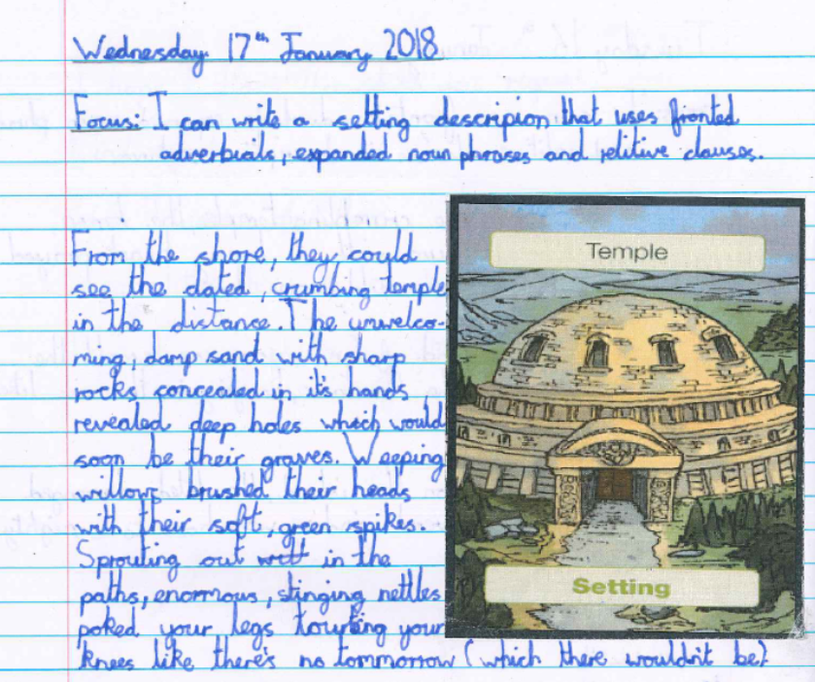 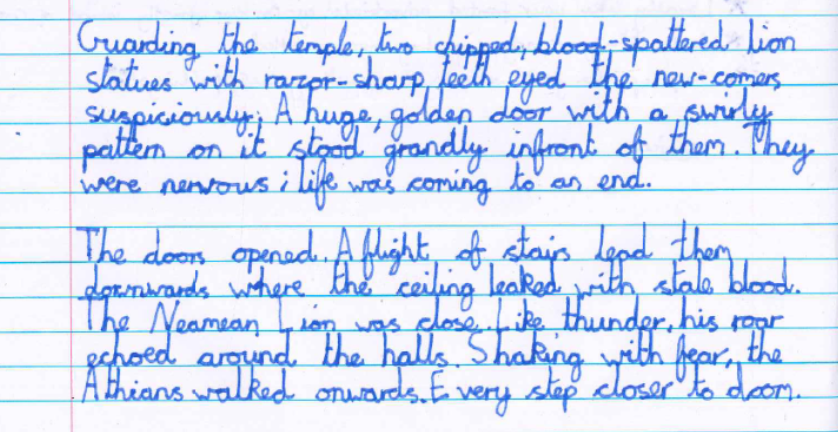 This term we are learning about ancient Greece and we have been looking at the legend of Theseus and the Minotaur in English.  Over the last couple of days, we've taken on the role of Theseus and pretended he had to write a letter to apply for the job of 'hero' in the the Minotaur story.  Have a look at Harriet's letter below.

Over the last few weeks, we have been learning about writing warning stories, with a focus on Michael Morpurgo's Mad Miss Marney.  We've got some superb writing to show for all the hard work.  Have a look at some of the extracts below. 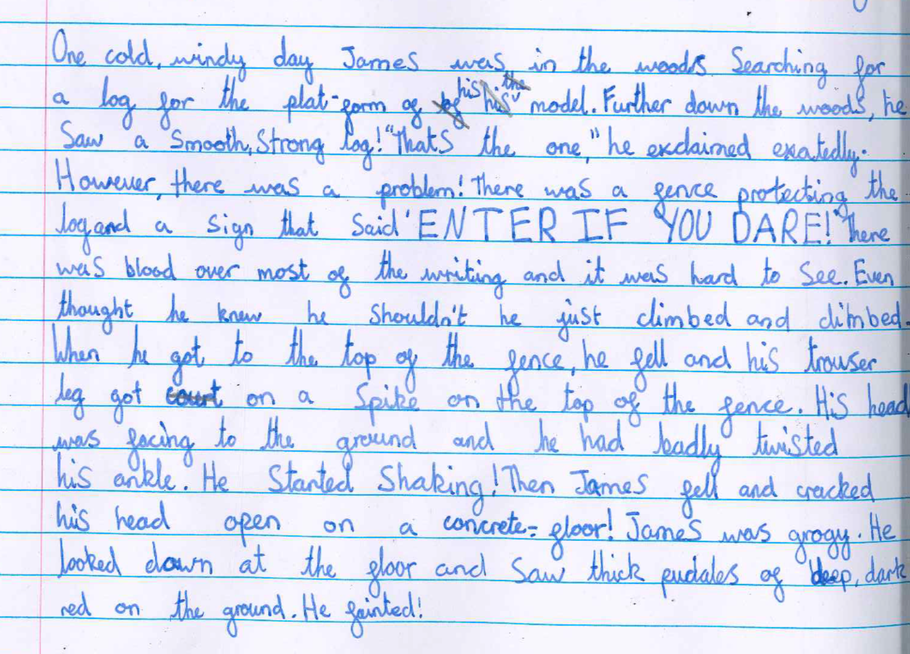 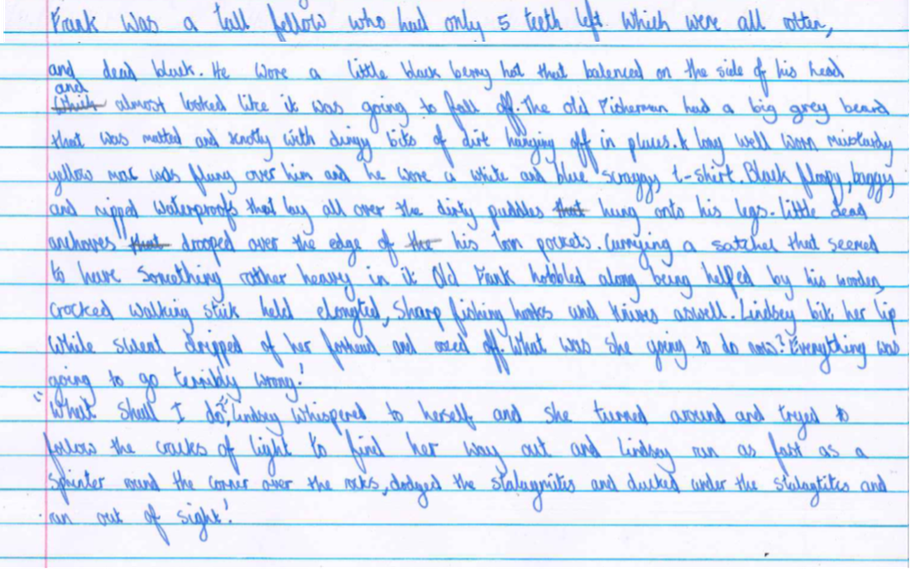 Well done Chestnut!  2 wins out of 2 in the battle of the bands!  This time it was Ethan C who top scored with a whgopping 15,513 points! 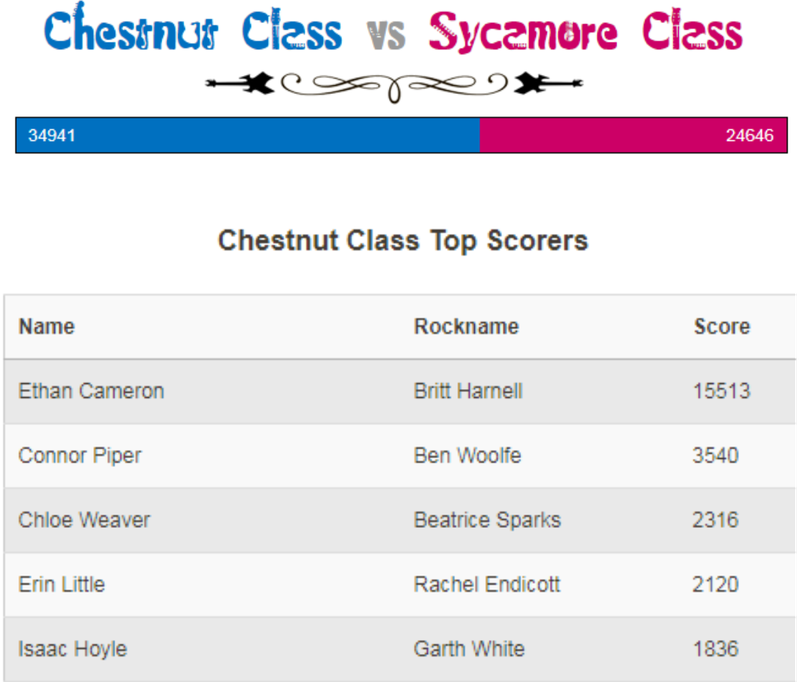 Congratulations Chestnut Class!!  Despite a late push, we have held off the challenge of Sycamore and won our first Battle of the Bands!

Well played Erin L who led the way with a mammoth 6596 points scored in the last week.  Our top 5 scorers are listed below. 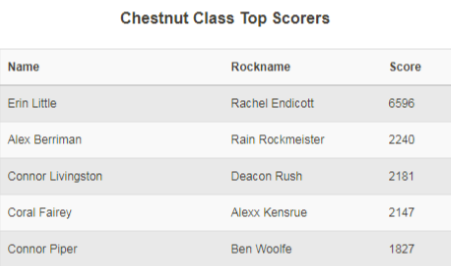 Today, Chestnut class visited Dartmoor to look at the remains of Bronze Age settlements as part of our history and geography learning.

This afternoon, year 5 had a visit from local artist Brian Pollard to show us how to draw in his style as we've been learning about his work in art.  Most of his work has three zones (the sky, the sea and the ground) so we'd already painted the backgrounds before he came in.  Then, he showed us how to paint people, dogs, balloons, planes and helicopters to fill up our scene.  We were all surprised to see he did most of his drawings by joining simple shapes together!  His visit was really fun and we all enjoyed it.

By Connor L and Sophie W 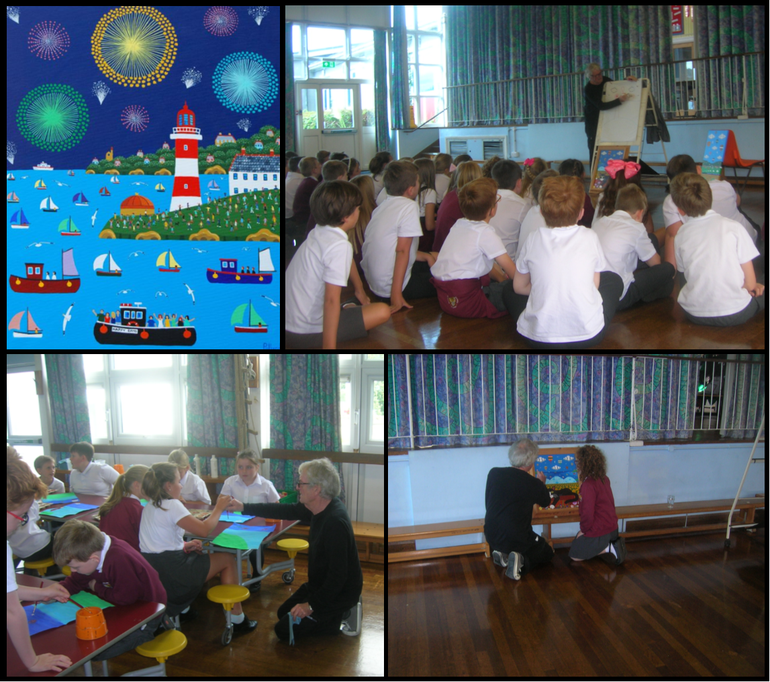