Today, Woodford held our first Plastic Pollution Day, organised by our School Parliament.  In year 4, we decided to produce some poetry based on the threat to our environment and plastic pollution in particular.  The children were hugely inspired by what they heard from Greta Thunberg, Sir David Attenborough and Catherine from the Devon Wildlife Trust who visited us in assembly today.  Have a look at some of our performances on the issue below.  You can tell by the emotive language chosen by the children that they understand the severity of the issue and are inspired to help make a change!

Forget About Plastic by Olly and Harry.mp4 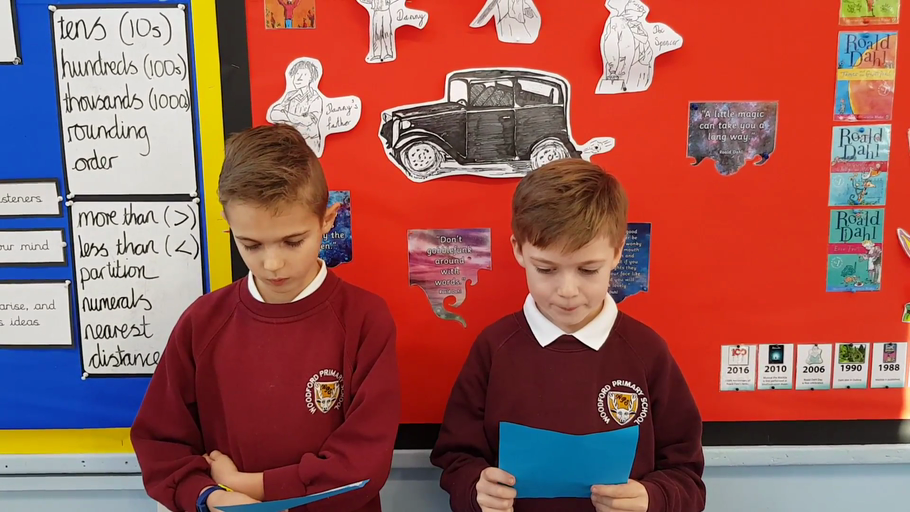 What a Wonderful World by Harry and Charlie.mp4 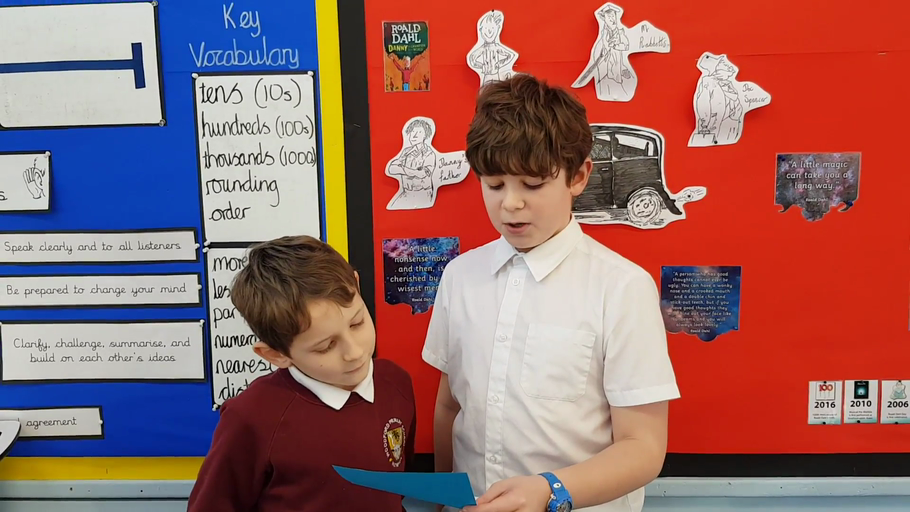 Down Below by Molly and Summer.mp4 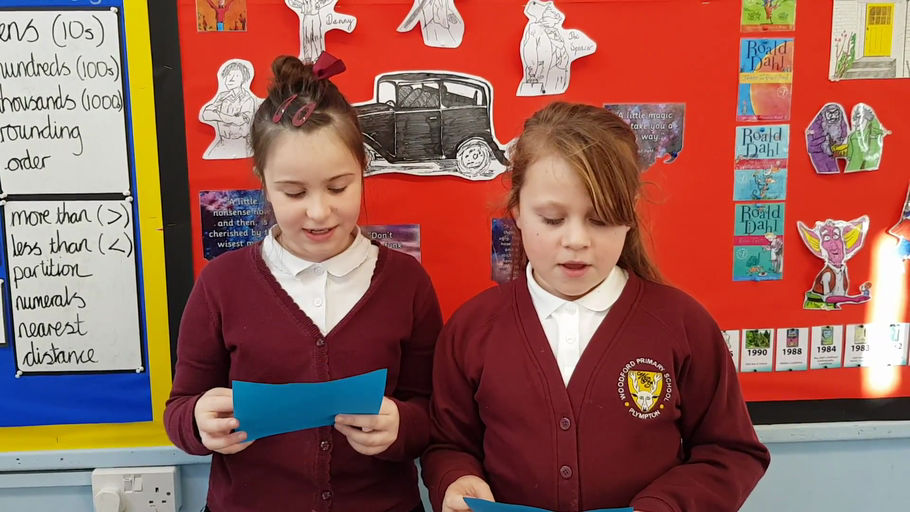 Plastic - No Thank You by Sophie and Esme.mp4 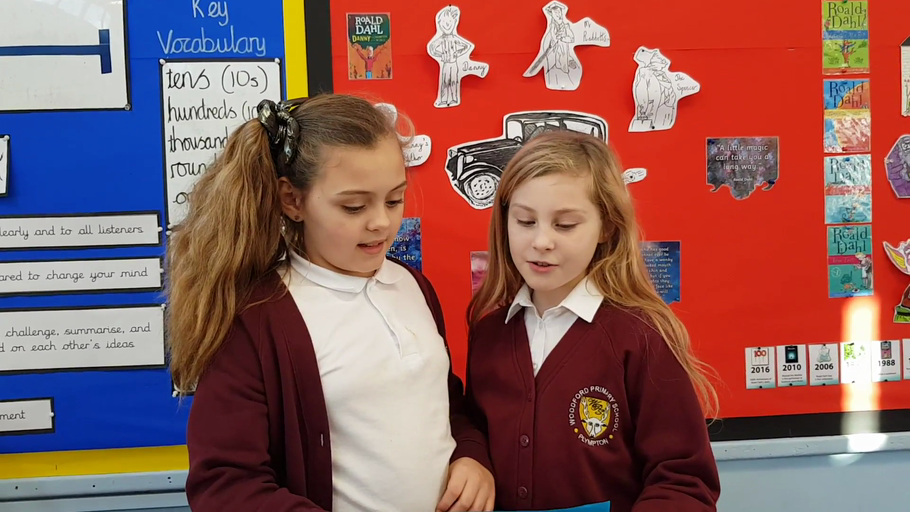 Save the World by Orla.mp4 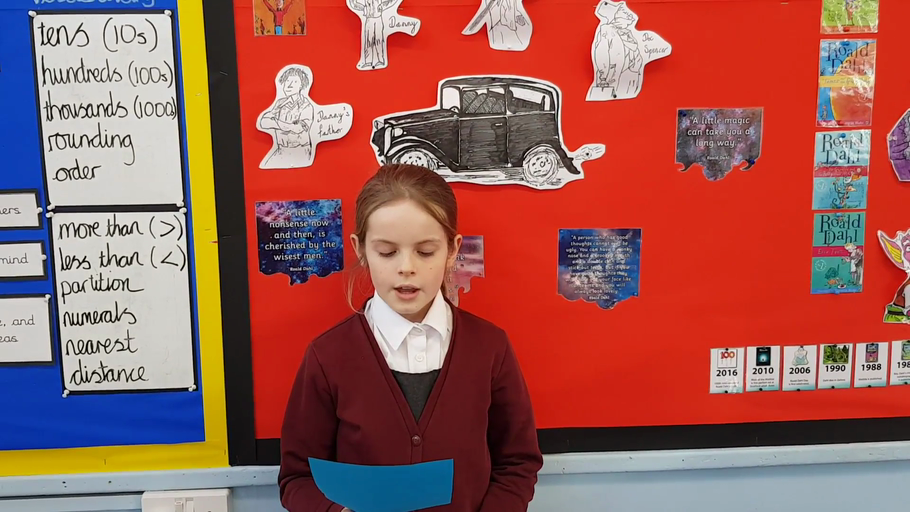 Our Wonderful Sea by Shane.mp4 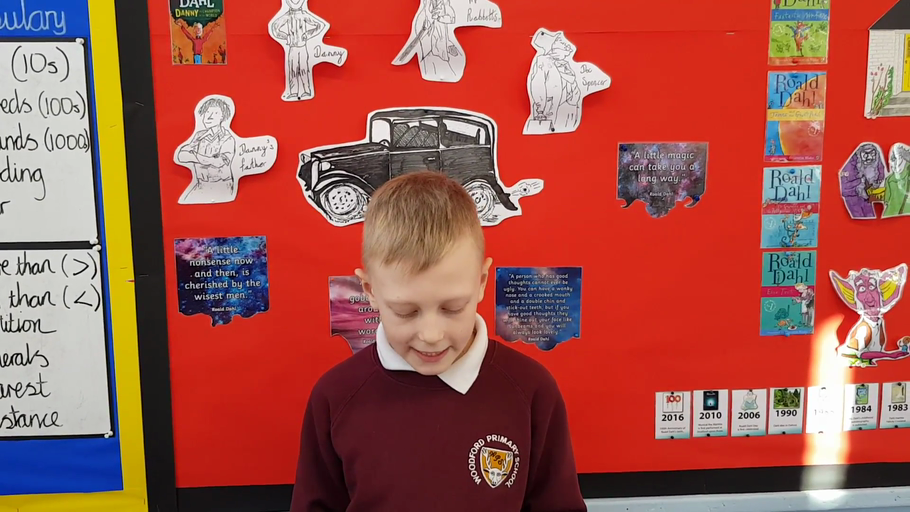 To kick-off the new year and our some new learning about the rainforest, Cedar class produced some artwork inspired by the French painter, Henri Rousseau.  The children began by mixing paints to produce a background wash before adding the detail of the rainforest on top.  We finished by using oil pastels to produce the animals to stick on top.

The children thoroughly enjoyed their Christmas party today.  Thank you to all the kind donations of food, drink and plates.  A real feast was provided!

This week, the children have been studying David Walliams and Roald Dahl as part of our learning about biographies and autobiographies.  Today, we completed a piece of autobiographical writing and shared this with the children from Hawthorn.  The writing was excellent - happy, funny and sometimes sad - and I think we've all learned some new things about each other!

Over the last couple of days, we've been thrilled to celebrate the success of Molly-Mai and Esmé who have both completed all 6 levels of their Spelling Bee challenges and flew through their final test with Mrs Meadows.  Then today, Lily was rewarded for all the hard work she has put in to learning her times tables as she breezed through her times tables cap test, having reached level 420 on Times Tables Rock Stars.  Well done girls - you've made incredible progress in a really short space of time!

This term, we've been working really hard on our spelling and some of the children have whizzed through all 6 levels of our year 4 lists already.  Today, Mrs Meadows, our Queen Bee, visited us to test the children on the full range of these spellings.  Congratulations to Sophie, Ella, Libby, Paige, Finlay H, Finlay L and Harry H who all earned their Spelling Bee badges.  It was an extra-successful day for Sophie who also earned her times tables cap after learning all of her multiplication and division facts up to 12 x 12.  Great work everyone! 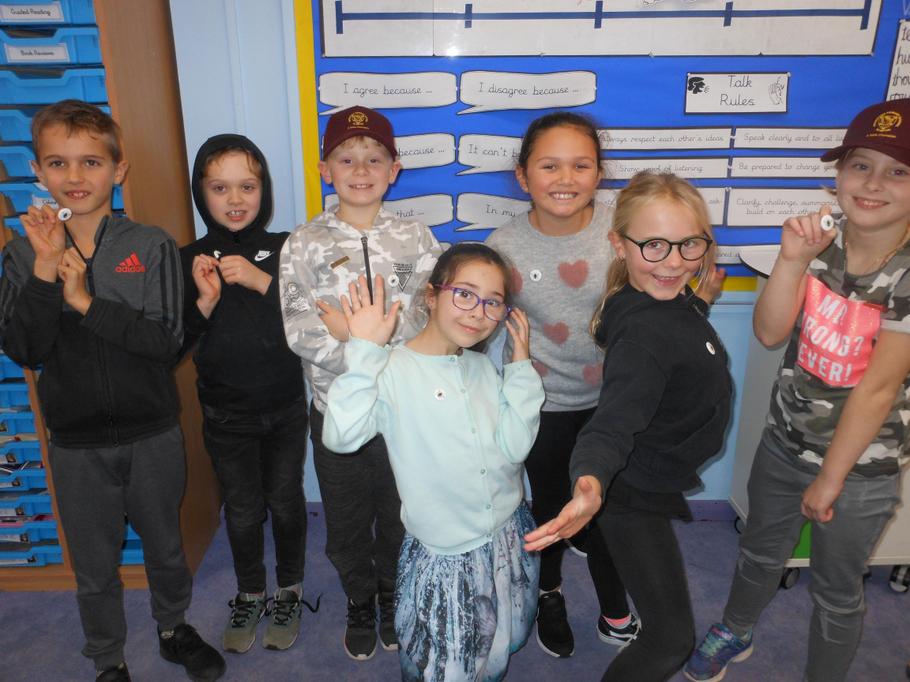 We were thrilled to see Taiya earn her times tables cap today.  Taiya has worked so hard this term to learn her tables and has made incredibly quick progress.  What a great achievement!

In the last week, we have been writing our very own versions of How to Train Your Dragon and we were able to share the finished products with each other today.  All the children are very proud of their efforts to include new writing skills in their stories and some children were able to visit other classes to show off their hard work.  Here's Daniel, Lily and Evan reading their fantastic efforts.

How to Rescue Your Vicious Little Dragon.mp4 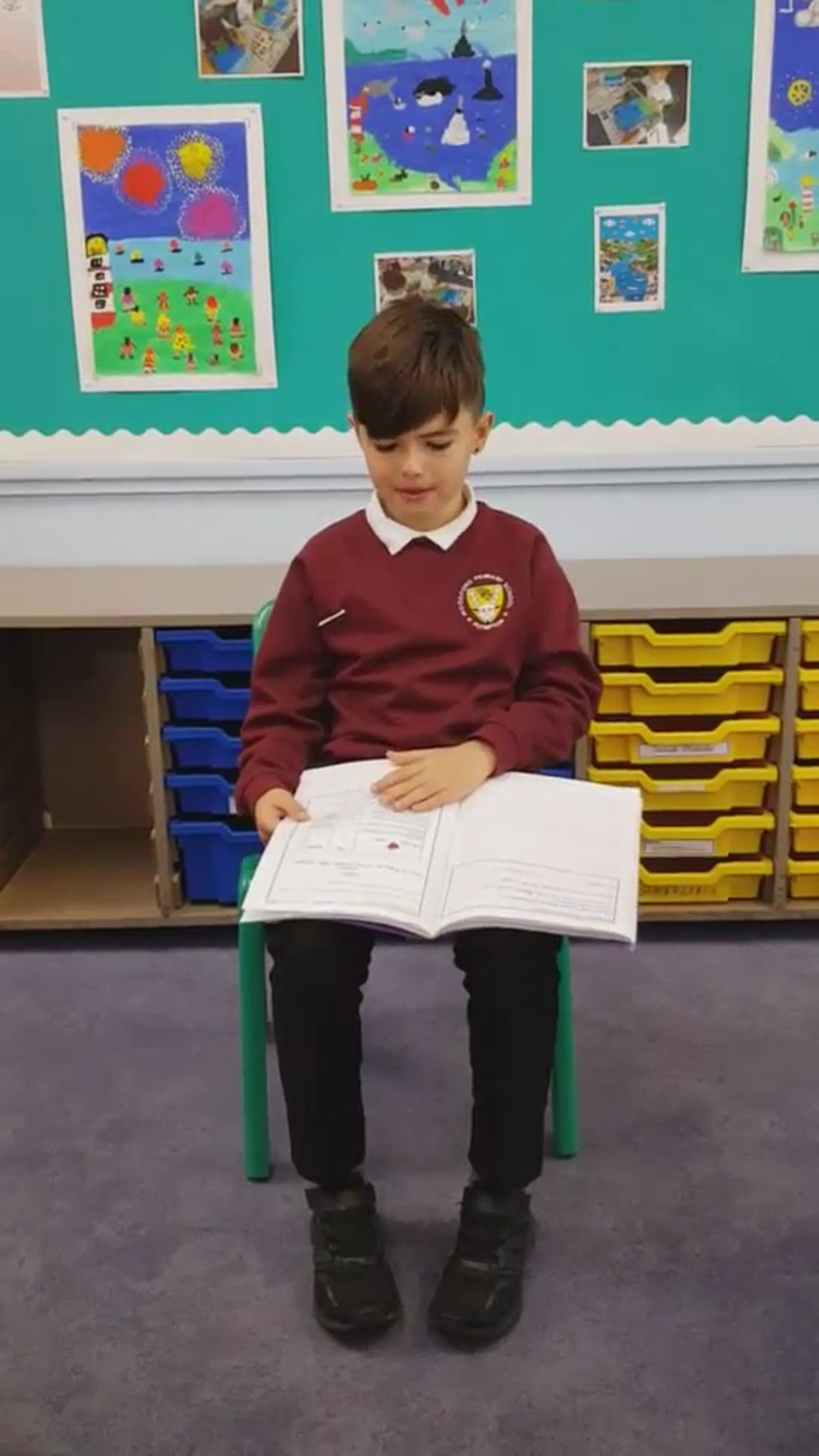 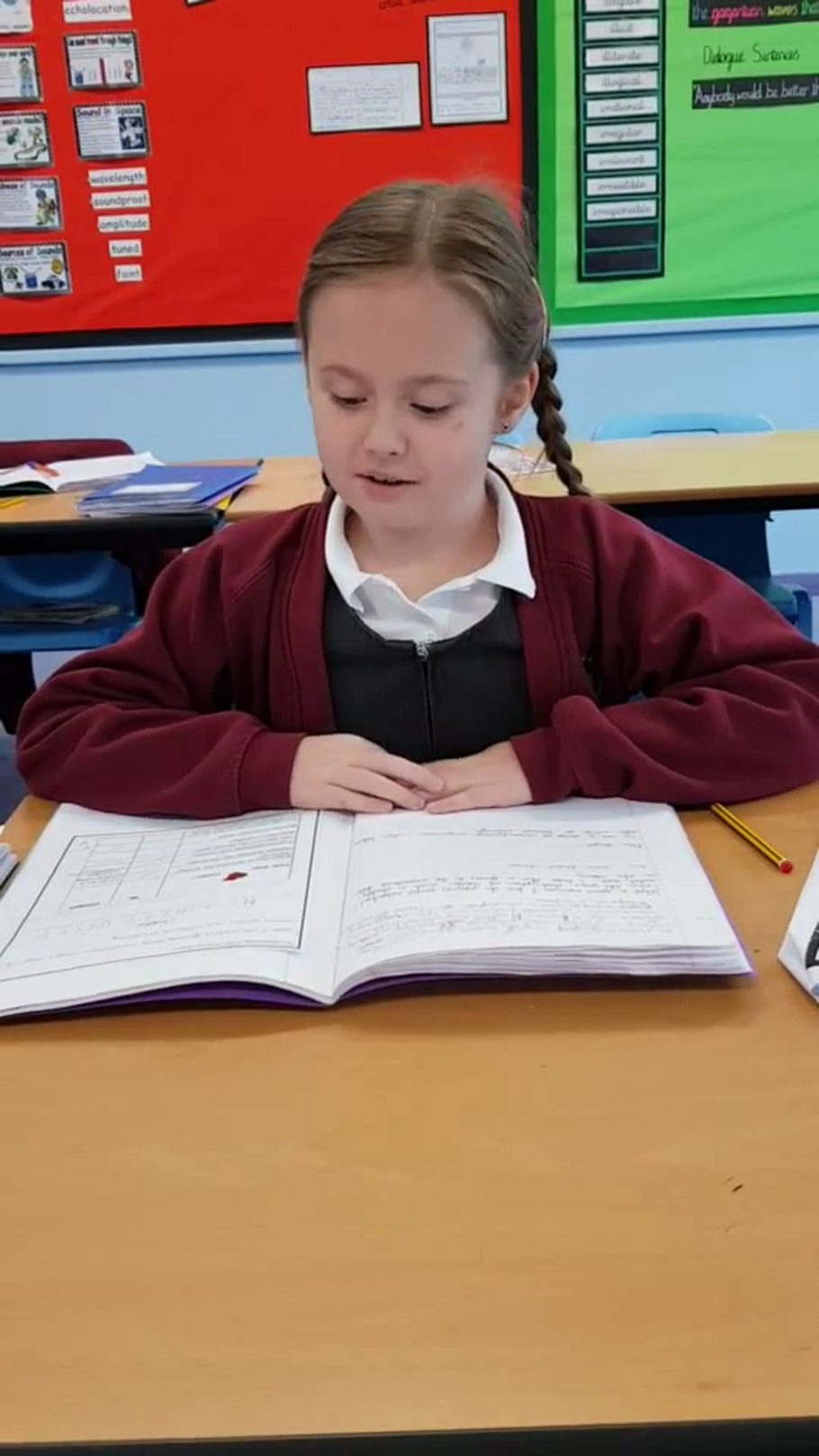 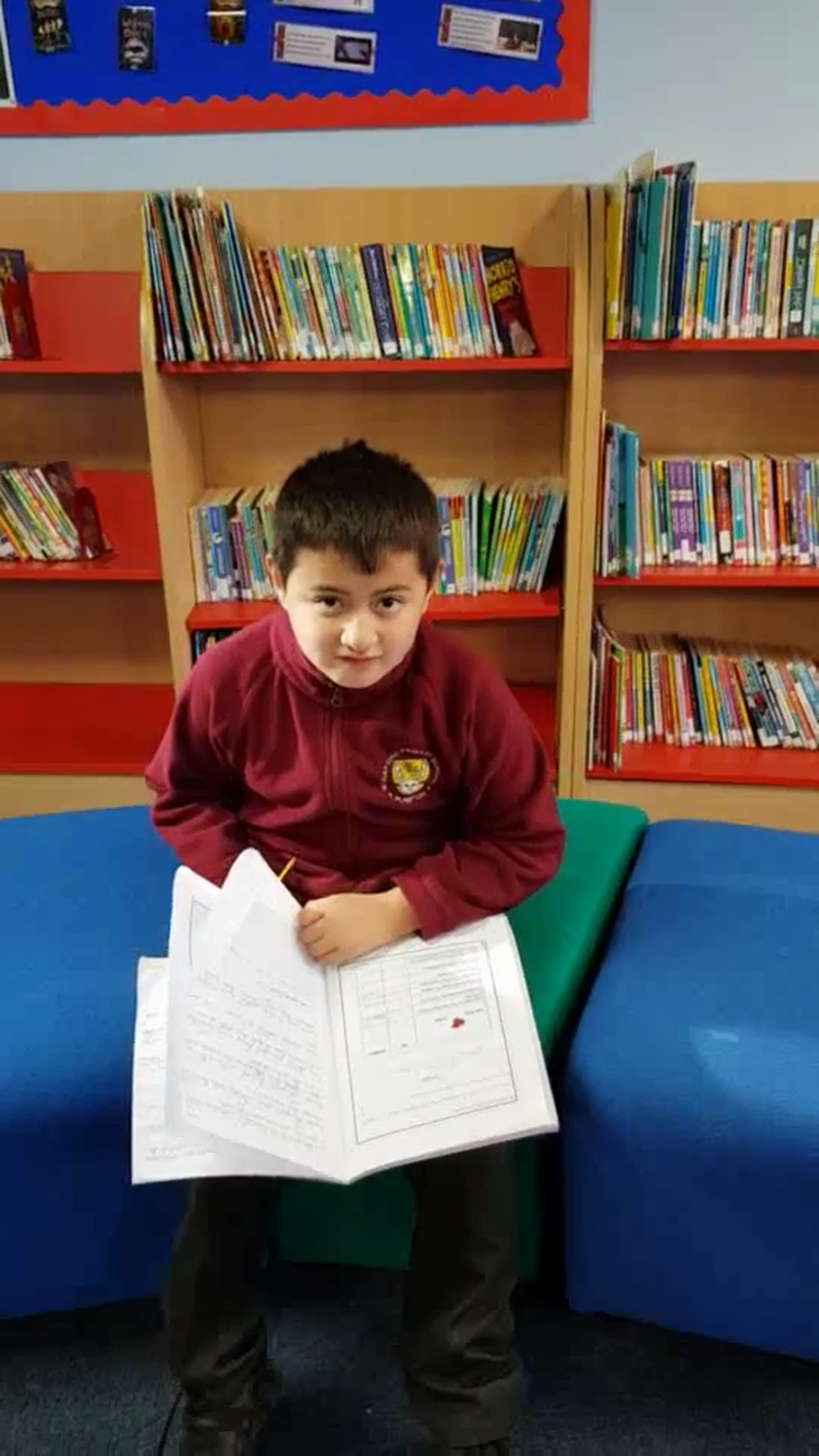 Congratulations to Rio, Harry G and Frankie who all earned their times tables cap this week.  Our chair of governors, Mrs Johns was incredibly impressed with the speed of their recall and they flew through their tests!  And well done too to Ellie who has completed her Spelling Bee challenges and was visited by our Queen Bee, Mrs Meadows for her honeypot challenge.  Again, Ellie flew through her test and has become the first person in year 4 to reach the bee hive!

This week, the children have been planning and writing their own chapter 15 for How to Train Your Dragon.  The Vikings have hatched a plan to make two enormous dragons, Purple Death and Green Death, face off as they just didn't know how else to deal with them.

This is what Esmé and Olly thought would happen. 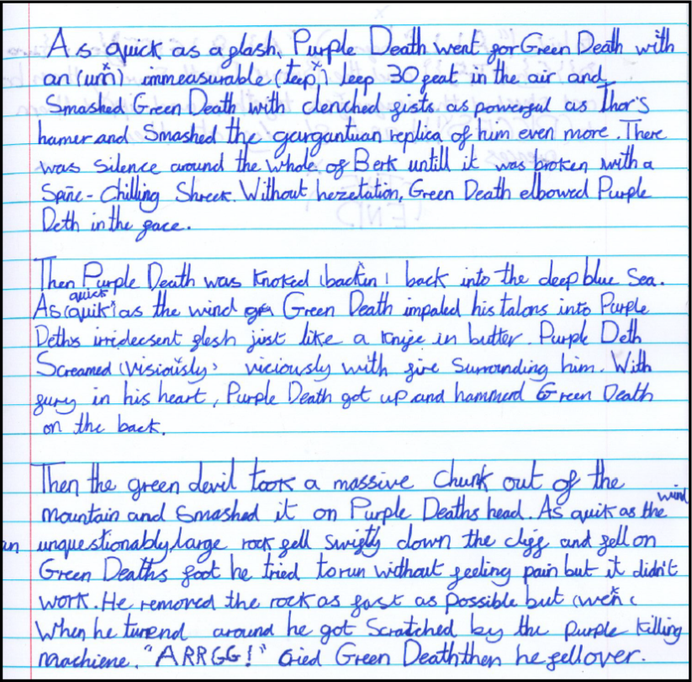 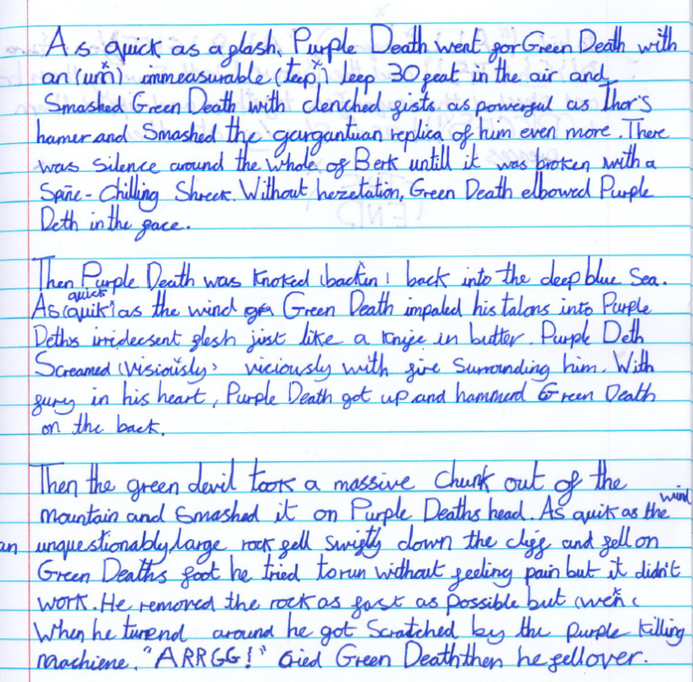 Well done to Molly-Mai, Finlay, Evan, Reece, Harry L, Ella and Libby who all earned their times tables caps this week after being tested by our Chair of Governors, Mrs Johns.  All the children have been working so hard to learn their times tables and this is a great example of how much can be achieved in a short time.  Great effort everyone! 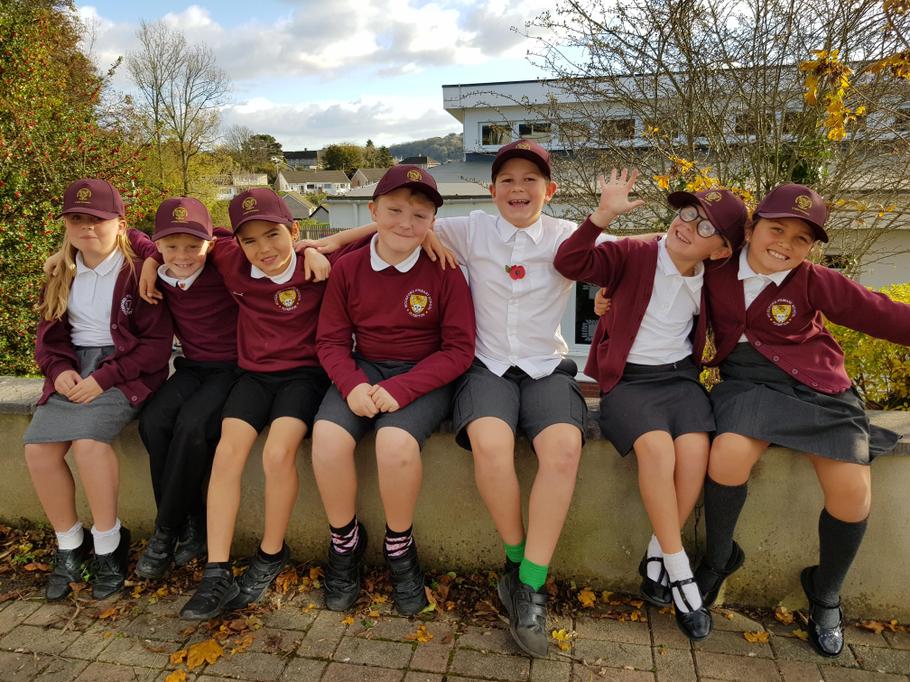 Today, we were visited by Stacey from the Dogs Trust and her dog Midnight! Stacey talked to us about how to stay safe around dogs and explained that this is for our benefit and their benefit!  It was a really fun, interactive session and we should now all be experts when it comes to being around and looking after dogs.

Here's Harry H and Sophia along with Caelan and Jess C from Cherry posing with Midnight! 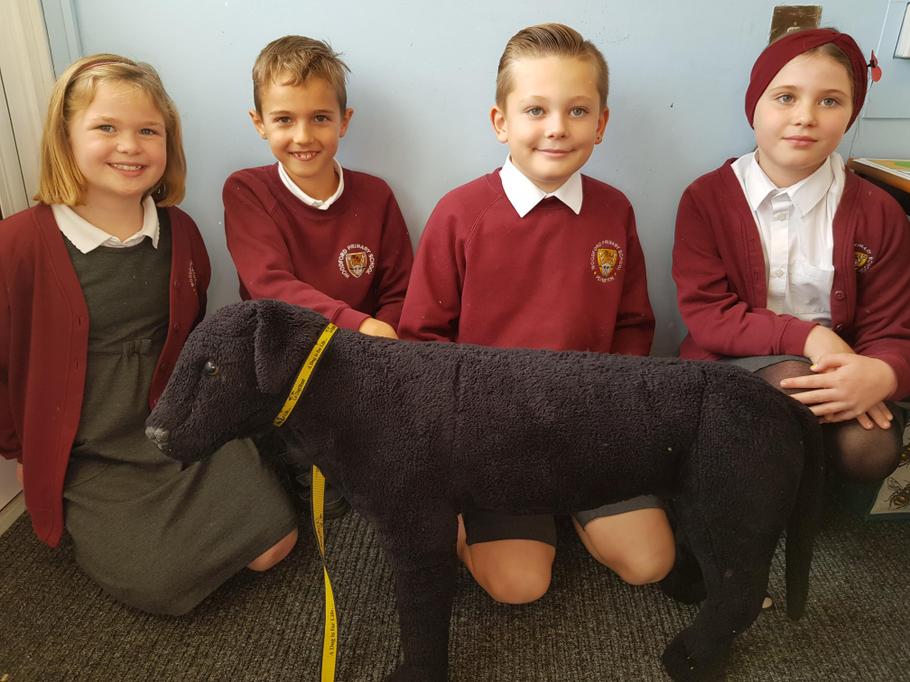 When we came back to school on Monday, the children heard about a man who was having problems with some new noisy neighbours that are making it impossible for him to get any sleep at night.  He had tried a few strategies to block the sound out without success and so we decided to conduct a science experiment in class, investigating which material absorbs the most sound.  After using a decibel meter to measure the results, we wrote to 'Andy' to offer him some advice.  Have a look at the great letters that Paige and Ellie and Sophie wrote. 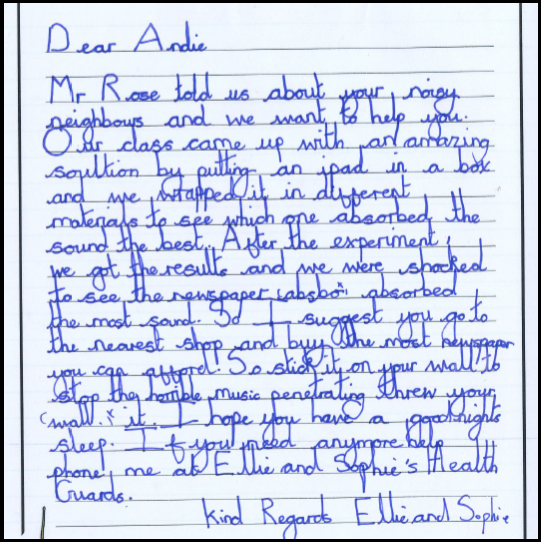 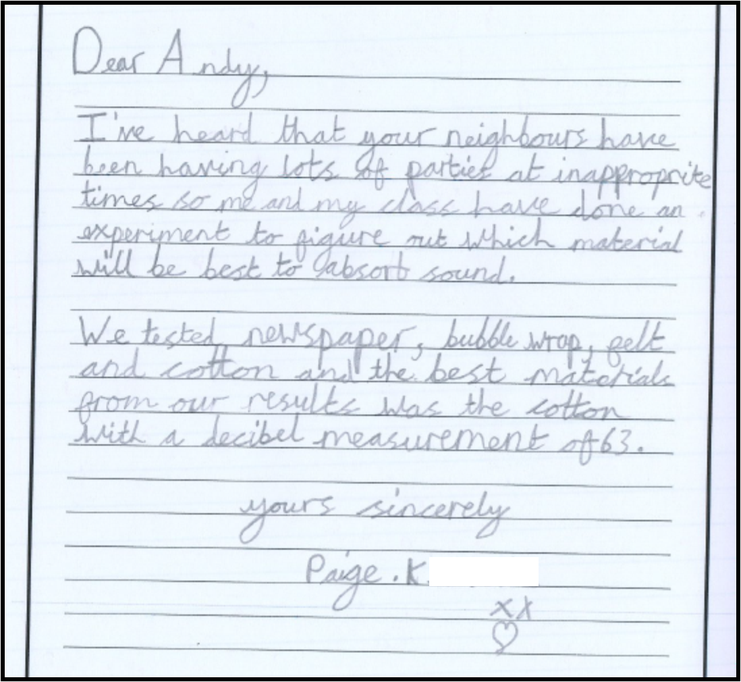 Longships were a type of specialised Viking battleship that were specially designed to allow Vikings to arrive and leave quickly following a raid.  There design influenced ship building for many years after and this week, the children have been evaluating the different characteristics of the ships.  Harry L produced some amazing writing about the ships.  Have a look below.

Over the last two weeks, the children have been learning about descriptive language and working to create their own descriptions of the Isle of Berk, from the novel How to Train Your Dragon.  Have a look at Ella and Charlie's brilliant work below!

This afternoon, Cedar Class were able to trial a brand new game that helps children learn their addition and subtraction facts.  The website has been produced by the same people who run Times Tables Rockstars and will encourage rapid recall of number facts that support maths learning in the classroom.

Today, we have had the most fantastic Viking experience. We had two brilliant visitors, Mr Lewis who helped us to create some stunning pieces of wave art by mixing paint colours and using a variety of painting techniques. It was a lovely, relaxed, creative time. We also had our Viking visitor Ragnar, who told us tales of the Viking gods and their cosmos. Then, we were archaeologists and we dug to find Viking artefacts; we found combs, pottery, coins and jewellery. It was fascinating. Ragnar then taught us to read and write in Runes and we were able to translate some writing and scribe our names.

Finally, we played an ancient Viking games called Hnefertafl. It is a bit like chess, but much more fun!!

Please look at our amazing photos and see if you can find your Viking self.

This afternoon, Woodford's cross-country team attended Hele's Cross-Country Championship.  All the children put in a phenomenal effort as Woodford won each category.  Well done to Lily who represented Cedar brilliantly and helped the year 3/4 girls team win their event!  You showed courage, determination and resilience this afternoon, Lily!  Great effort! 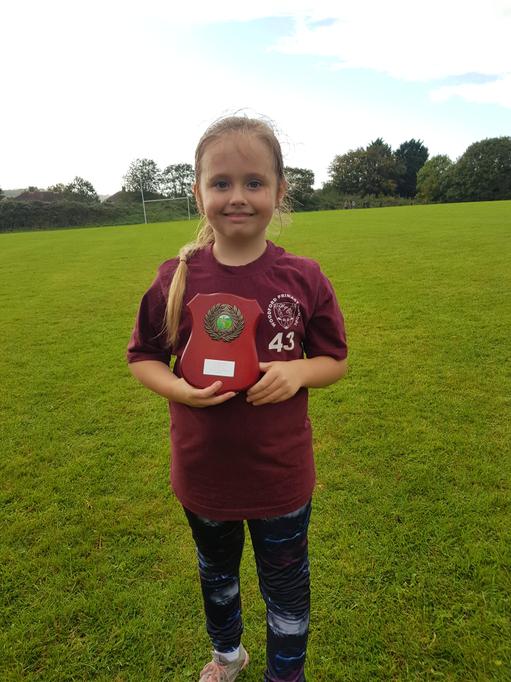 The children enjoyed a fantastic climax to a busy first week today as we welcomed some of our parents in to school to speak to the children about their career.  Over the course of the day, the children experienced workshops from Mrs Barnes who is a Naval Systems Programme Manager, Ms Blackler a 999 Call Handler, Mr Barker who runs a security company, Mrs Whiting who owns the Flower Cafe on the Barbican, Staff Sergeant Berry who spoke about his career in the army and Mr Hockley who is a paramedic!  We'd like to thank all the parents who gave their time - I know lots of our children were inspired by what they saw.